Especially users with multi-monitor systems may have noticed a change in Windows Explorer of Microsoft's new operating system Windows 7 that may impact their workflow severely.

The option to "Remember each folder's view settings" has been removed from Windows Explorer which is a problem for some Windows 7 users.

It does not only affect users with multi-monitor systems who now have to move the windows to the right position whenever they are opened but it also affects single-monitor systems especially if the user has configured Windows Explorer to open a new window for each folder that gets opened.

ShellFolderFix is a lightweight program for Windows 7 that provides the means to save individual folder positions and sizes in Windows Explorer. 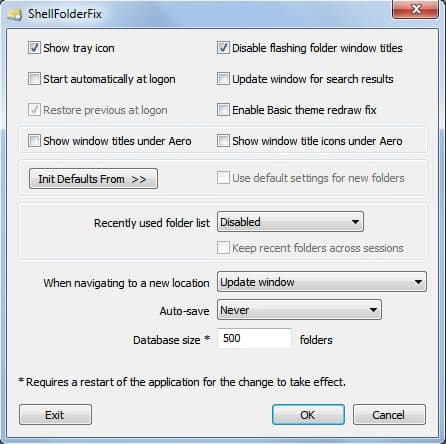 The program is a background application that records the folder position -- using its dimensions and x/y position -- of every Windows Explorer folder that gets opened to restore those settings whenever the folder gets opened again.

The default limit is set to 500 folders which can be increased in the program's options. Users might start with the default figure and increase it if they notice that folder position information get lost after a while.

Other options provided are to start the program automatically during system start, show window titles and window title icons in Windows Explorer if Aero is enabled, disable flashing folder window titles, or configuring auto saves and behavior when navigating to a new location.

Users may enable auto-saving of information, and change the default behavior of the program when navigation to a new location in the preferences of ShellFolderFix as well.

ShellFolderFix uses roughly eight Megabytes of computer memory while running which is fairly acceptable especially for users who find the problem annoying.

The software program to save folder positions in Windows 7 can be downloaded from the forum it was released.