CovArt Ops is a new portable program for Microsoft Windows devices that you can use to scan a folder or entire drive for music cover art.

Many modern media players like Winamp, Windows Media Player or iTunes display cover art and other information about the music that is currently playing in the interfaces. The same is true for cell phones and hardware mp3 players that usually also come with that option.

There are however a few problems related to cover art compatibility. You may run into these issues when you play music using different programs or apps, for instance on iTunes on your computer, and a third-party music player app on your mobile phone.

Some media players, like Apple's iTunes for instance, have the ability to add covert art. This is however done in a way that makes it impossible for other music players to access that cover art.

And then there are different locations where cover art can be saved, namely as tags or as separate images in the music folder. 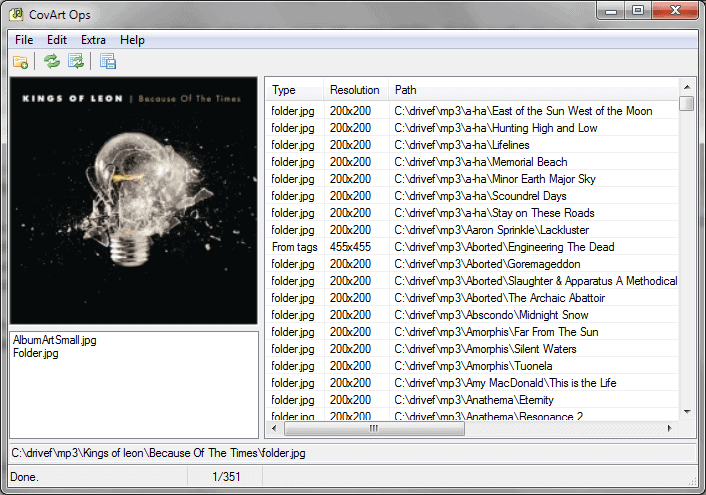 CovArt Ops is a portable software from our friends over at Donation Coder. The software can be used to check an entire folder (and subfolders) of music for cover art.

The scan does not take long and CovArt Ops will display various information about each album that was discovered during the scan. This includes if cover art is included in the album, the type of cover art (folder image or tag), the resolution of the cover art image, and the path on the local computer system. The program can also display the cover art if available.

The program can be used to sort a music collection so that all albums without cover art become visible in the interface. The information (all or selected rows) that have been gathered during the scan can be exported to a csv file which makes the processing easier.

CovArt Ops does not have an option to download cover art. Is is therefore only possible to use the information that it presents to find the missing cover art.

It can be a very helpful program for users who want to update their music collection manually instead of using a software program to automatically download cover art like the previously reviewed Album Art Downloader or Picard.

Covart Ops is available on the Donation Coder forum. It should be compatible with most versions of Microsoft Windows. Worked fine on our Windows 7 Pro test system, and on a Windows 10 computer.