There are a few ways to take care of important emails that are arriving in your email inbox. The best way to deal with them is to react right away if possible.

This sometimes does not work however if research, data or consultation is required before the email can be processed and replied to.

The desktop email client Thunderbird comes with a few options to mark those important emails, one being the option to add tags to emails which will color code them in the email client.

Other email users prefer to move important emails into a special folder so that they can access the emails in that folder at a later time without having to search the email folder structure for them.

Update: Note that eMarks has not been updated since 2010. This means that it is no longer compatible with recent versions of Thunderbird. You can however star emails in Thunderbird now which has a similar effect.

A third option is provided by the Thunderbird add-on eMarks which supposedly stands for email bookmarks.

The add-on adds a new toolbar to the email client. Emails can then be dragged and dropped to that toolbar easily. This makes these emails available from every folder you may be in so that they are universally accessible.

A click on an email listed there loads it right away so that you can read it again or reply. Thunderbird will automatically switch to the folder the email is stored in and display it in the preview pane. 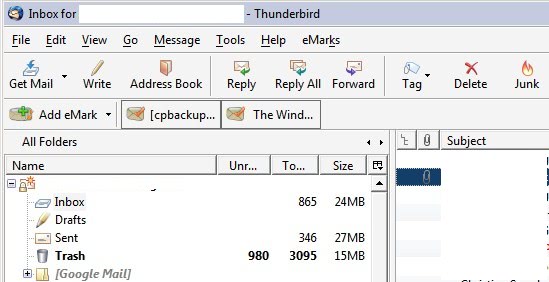 A right-click on any bookmarked email will open a context menu with options to open the email in a new window or tab and to rename or delete it.

Users who prefer no additional toolbar in the email client can disable it and access the bookmarked emails from the file menu at the top.

An emarks entry is added by the extension that can be used to access the bookmarked emails with three clicks of the mouse. Not as comfortable as the toolbar solution but better if space is an issue.

Martin Brinkmann is a journalist from Germany who founded Ghacks Technology News Back in 2005. He is passionate about all things tech and knows the Internet and computers like the back of his hand. You can follow Martin on Facebook or Twitter
View all posts by Martin Brinkmann →
Previous Post: « Taking Advantage Of Thunderbird's Email Display Options
Next Post: Thunderbird Quick Folders »