Windows Software To Create Multiple Folders At Once

There probably are not a lot of users of the Windows operating system who need to create thousands of folders in short time. If you are one of them you can automate the process with the program New Folder Wizard which is capable of creating up to 20000 folders in one run. While my imagination is not able to come up with a scenario for that many folders there might be others who exactly need a software program like this to save lots of time.

New Folder Wizard is a portable software program for the Windows operating system. It requires the Microsoft .net Framework 2.0, runs on both 32-bit and 64-bit editions of the operating system and can be downloaded directly from the developer's homepage. The software itself comes with a set of interesting features to aid the user in the folder creation process. 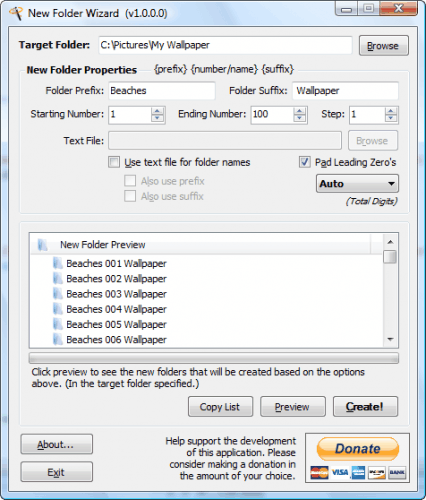 The configuration of the software is handled in the main interface. The user needs to select a target folder which becomes the root folder for the folders that are created. It is furthermore possible to add folder prefixes and suffixes, starting and ending numbers and steps for those numbers.

Another option is to load a text file containing names into the program to create folders based on these names. The process can be previewed so that the user knows how the folders will be named. The generated folder names can be copied to the clipboard for external processing.

New Folder Wizard is an interesting lightweight application for the Windows operating system.

Update: The developer website is no more. We have uploaded the latest working file version to our servers. You can download New Folder Wizard from here: [Download not found]