Working with services in Windows regularly can be quite the challenge. The official way to manage Windows services is to open the built-in services manager. Once the Services manager has been opened it can be used to start and stop services or to change their startup type.

The services manager is fine if the process is done a few times a month but it can become quite annoying for users who have to start and stop services multiple times throughout the day.

The third-party program Services Manager has been created to offer a tool to these users to quickly manage services from the computer desktop.

The program places an icon in the system tray that can be used to quickly open a window displaying all Windows services.

It takes one click to start or stop a service in Windows using the application. Even better is the option to add services to the favorites. Favorites are services that can be accessed directly after right-clicking the system tray icon. A left-click on a favorite service will either start or stop that service depending on its current state.

This means that a running service will be stopped, and a stopped service started again.

The Windows Services Manager requires the Microsoft .net Framework ( version 2.0) and a computer system running the Windows operating system. It can be directly downloaded from the projects homepage over at Codeplex. The software worked fine on a Windows XP SP3 test system.

The developer of the software has plans to add additional functionality to the 1.0 final release of the software. It would for example be nice to be able to sort the services mimicking the sorting possibilities in the original services manager.

Update: The most recent version of the program has been released in 2009. I have tested it on a 64-bit Windows 7 Pro system and it worked fine on it.

The latest version offers new features and a interface that is slightly different. The favorite and start/stop boxes are now placed on the right next to each other for example. You will also find links to the native service manager of Windows and the task manager here so that you can open these tools as well from within the application. 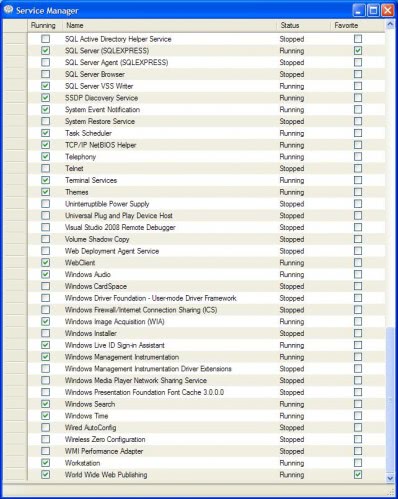