The opinion on the quality of digital music can differ widely depending on the personal taste. Some users are perfectly happy with music that has been encoded with 128 Kbps or even less while others swear on lossless music codecs. The perception of the individual is the most important factor although others might play a role. It can usually be said that a higher quality digital audio file will use more storage space on storage devices.

It might make sense to reduce the quality of the music to be able to store more of it on the devices. It is obviously up to the individual user to find an acceptable quality setting. One application that can modify the quality of music. 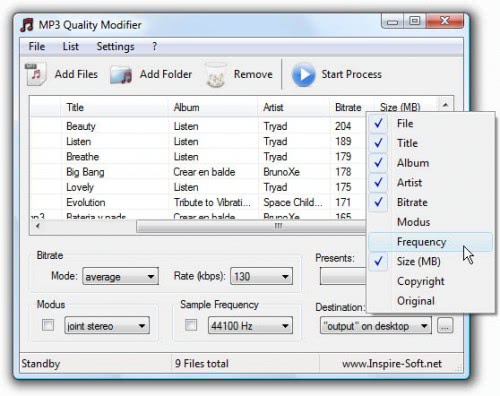 The software is pretty easy to use. It takes only a few clicks to modify the quality. The user can drag and drop music into the interface. Various information such as the name, size or bitrate are displayed automatically. The last step before the conversion is to select a preset which ranges from high quality over portable and compromise to low quality with the option to add custom presets to the application.

A preset is made up of a sample frequency, bitrate mode, rate and modus. Conversion takes only a few seconds per song and can remove the original if that is wanted by the user. The results page will list the size differences between the original and the conversion. MP3 Quality Modifier can be downloaded from the developer's website.