SmugMug is a popular photo hosting and sharing website. The main difference between SmugMug and other photo hosting websites like Flickr is the fact that users have to pay for a SmugMug account after an initial 14 day trial period. We do not want to go into more details as to why it might make sense to join SmugMug instead of similar websites such as Flickr. The concept seems to work as there seem to be more than 300.000 users who pay for a SmugMug membership.

Guests and registered users can browse the photos at SmugMug in various ways including by keyword and author. Photos are displayed in galleries with no apparent way of downloading them to the local computer system. The right-click is blocked by default. Advanced Internet users know that this is little protection as there are numerous ways of downloading the photos despite this. To mention two: Photos are saved in the web browser's cache which means it is possible to simply copy them from the cache to another directory. Another option is to look at the source code which contains the direct link to the image hosted at SmugMug.

More comfortable than this is a software program that can download complete albums more or less automatically. One of these applications is Album Fetcher which can be used to download albums as a guest or registered users. All that needs to be done is to enter a user ID as a guest in the application's interface. The program will then automatically fetch all albums by that user and display them in the interface. 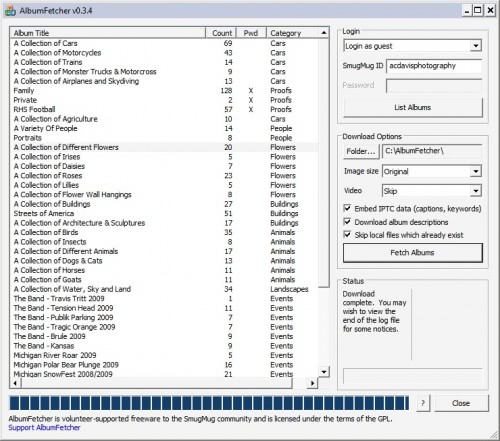 A few options are available for changing the download directory, photo size, enabling video downloads and importing IPTC data. Album Fetcher is easy to use and compatible with Windows XP, Windows Vista and Windows 7. The developer mentioned that users have reported that it is also working under Wine in Linux and Parallels in Mac OS computers.