Aerofoil is a free program for Microsoft Windows devices to extend the battery life by managing features that affect battery on the device.

It is a well known fact that it is possible to extend the battery life of laptops by turning off features that are not needed. This can for instance be hardware devices like modems, Bluetooth and WiFi. There is no real benefit of keeping those enabled if they are not used on the laptop.

We have covered applications like Vista Battery Saver before which turn of software components in Vista as well which can not only increase the battery life but also speed up Vista. 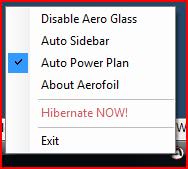 Aerofoil is another program that can help extend the battery life of Windows devices by turning off Windows Aero and the Windows Sidebar among other things.

Aerofoil does not rely on the Microsoft .net Framework on the other hand which is probably the most important factor when compared to applications that promise to improve battery life as well.

The computer memory footprint of Aerofoil is therefore much smaller than that of the other program. Plus, it does not require that a specific Microsoft .Net Framework version is installed on the computer to function at all.

The program can be selected to run at startup. It will place an icon in the system tray which can be used to quickly access the available options seen above. It is probably a good idea to have this or any of the other tools running on Vista laptops that run on battery.

Update: Aerofoil has been updated lately. It now supports both Windows Vista and Windows 7. The program's feature set has also been extended with the more recent updates. In particular, it can be used for the following purposes:

The program has not been tested extensively under Windows 7. The developer notes however that it should provide the same functionality on that operating system.

Update 2: Aerofoil has not been updated since, and the prime reason for that is probably that Microsoft did away with Aero Glass in newer versions of Windows. It is still useful if you run it on supported machines, but if you run Windows 8 or newer, you may want to try battery saving programs that are compatible with them instead.

Check out our guide on analyzing and reducing battery use on Windows 10.