There are many ways to legally download music from the Internet. The various methods depend on the legal situation in individual countries.

It can be said however that it is completely legal to record music from Internet Radio stations. Another definitely legal way is to download music that has been uploaded by the artist or the record company for public download.

ESP is a software program that combines both concepts. It makes use of the Shoutcast directory of Internet Radios that the user can listen to online.

It provides the means to record the active stream right away. Other applications that handle this well are Streamripper, Musicy and several music players like AIMP2 or XMPlay.

ESP would not be special in this regard if it would not offer a more or less unique feature in addition to being able to record Internet Radio.

The software can automatically search for music that has been publicly made available by the artist or the record company. The developers say that ESP looks only for music that has been uploaded by the artist to social networking websites. The software itself will not display the source of the music download which could be reason enough for cautious users to not use the feature. Tests revealed that it pulled songs from websites like MySpace. 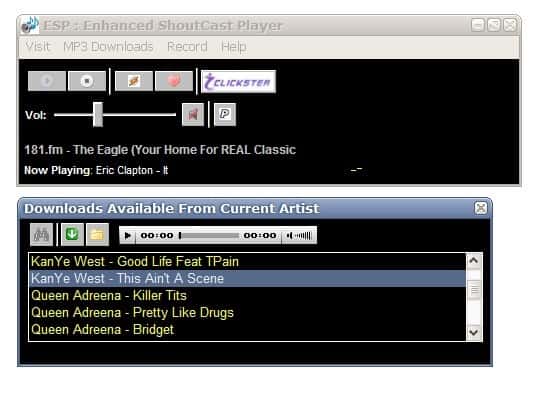 ESP is available for most Windows operating systems including Windows 98, Windows XP and Windows Vista.

Update: ESP is no longer available. The developer website is not returning content anymore and program development seems to have been stopped. You can still check out the options above that allow you to record Internet radio stations to download new music to your computer.

You can also check out the following two programs instead. First Stripper, a Streamripper frontend, and then Stream Harvester which both allow you to download from multiple radio stations at the same time.

Update: The Remlab software page has been reported as an attack page and we have made the decision to remove the link from this article.