XMPlay is a free audio player for Microsoft Windows device that is very powerful thanks to its add-ons engine and support for hundreds of extensions.

Some time ago I started to look for an alternative for the popular audio player Winamp. After some looking around, I discovered an ultra-lightweight alternative with exceptional functionality called XMPlay.

The tiny audio player has a size of about 300 Kilobytes, and can be run from any location as it is a portable program.

Did I mention that it is possible to save mp3 streams to your hard drive using it? 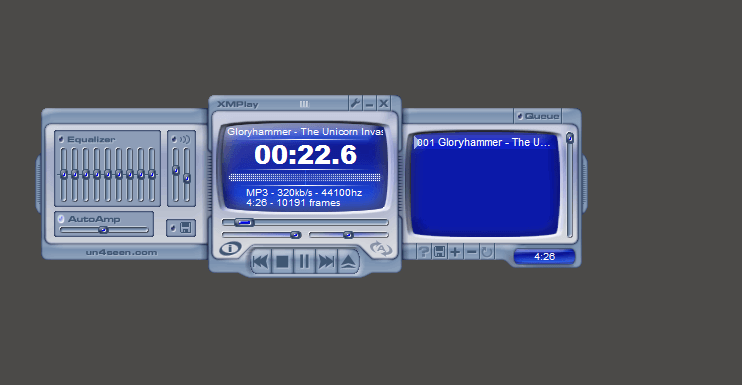 The player has a lot of features packed into its 300 Kilobytes that does not need to hide behind many other audio players on the Windows operating system.

The interface is tiny which is without doubt one of the main points of criticism when it comes to the audio player. While that is an issue, it is easy enough to install another skin to modify the interface.

The XMPlay support site lists more than 130 skins and more than 200 plugins that can be installed to enhance the music player even further.

You do need to create directories for skins and plugins though but that is explained on the developer website.Basically, what you need to do is open the root directory of the XMPlay program and create the folders Skins and Plugins in it.

Just copy the files into those directories and restart XMPlay to have them picked up automatically.

Several plugins exist for playing audio formats that are not that common. You can enable flac, mp4 or aac support for instance using plugins. 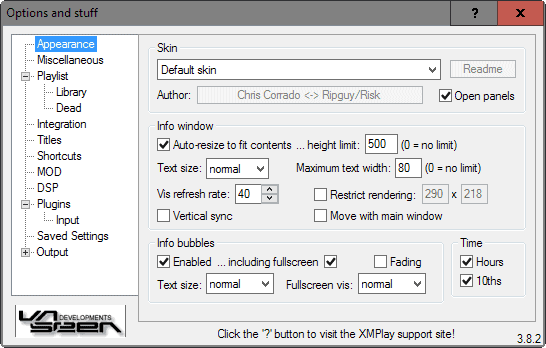 You may want to go through the preferences at least once that the player offers as there is a lot to discover there as well.

Plugins offered for the player are extensive. It support several Winamp Input plugins but also native plugins, DSP plugins, and others.

Some plugins extend the player's functionality, for instance by offering tag editing functionality or adding external encoders to the audio player.

If you want to use an audio player that supports all major audio formats and streams but is light on the resource side, then you may want to give XMPlay a try as it fits that bill perfectly.

Sure, it does not offer visualizations and other features that some may like, but if you are all about music then this should not really both you at all.

Oh, I forgot to mention that it uses only 6 Megabytes of Ram when playing an Internet radio stream while Winamp uses more than 20 Megabytes (the smallest Winamp version that is). XMPlay is by far the best mp3 player that I have been using. Goodbye Winamp.

Update: XMPlay is still regularly updated by its author. You find information about the updates on the official project site.

I have recently switched to AIMP instead, another media player that offers an even greater set of functionality than XMPlay. That does not mean that XMPlay is not great anymore, only that I moved on. It is still a wonderful lightweight audio player for the Windows operating system.