Windows users definitely do not have a shortage of video converters at their disposal. That's great on the one hand but it could make the selection process difficulty. The video converter applications differ greatly in complexity, some require minimal user input and knowledge of video terminology while others do require advanced knowledge about bitrates, codecs and framerates.

XMedia Recode falls into both categories. The video convert comes with several pre-configured profiles that can be used to convert videos with just a few clicks and no background knowledge at all.

Profiles exist for gaming systems like Microsoft's Xbox 360, Sony's Playstation 3 and for mobile devices like Apple's iPod and iPhone series, dozens of Nokia cell phones and other devices. Way more than 100 profiles are available to select and there is the option to select custom settings as well in case the device is not in the list.

Custom settings are very extensive. Dozens of video and output formats and codecs can be selected to convert the video into a different format. 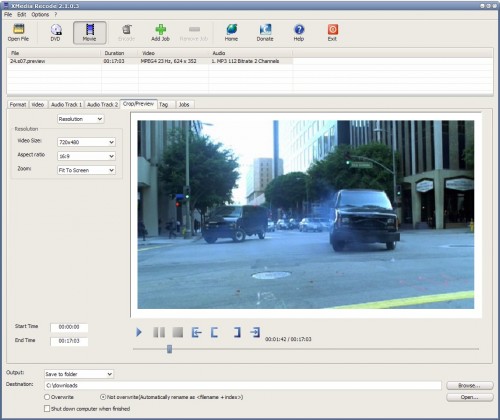 XMedia Recode provides features that most video converters do not. Most of these features are located in the Crop / Preview tab. This includes the option to cut part of the movie, change the resolution, crop the movie, deblock, invert or correct the colors.

The video converter is probably a bit easier to use than Super, one of our favorites. The software uses a German interface by default which can be changed in Optionen > Sprache to English, French, Japanese and Italian.