If you experience slowdowns or poor network performance in Windows Vista like slow browsing performance occasionally or even all the time you may be connected to a router or network device that is causing problems for Microsoft's Receive Window Auto-Tuning Level service. It's not the routers fault or your fault but more something that is caused by how the new feature was implemented into Windows Vista. There is a fix for that though which you should test to see if it resolves the network issues that you are experiencing.

The fix is rather straightforward, you need to run several commands on the command line as an administrator. Use Windows-r to bring up the runbox, type cmd and tap on the enter key. This opens the Windows command prompt where you need to run the following commands on.

Start with netsh interface tcp show global which displays the TCP Global Parameters. One parameter listed is called Receive Window Auto-Tuning Level which can be set to restricted, disabled, normal or highlyrestricted and probably several other that are not that important for the solution. 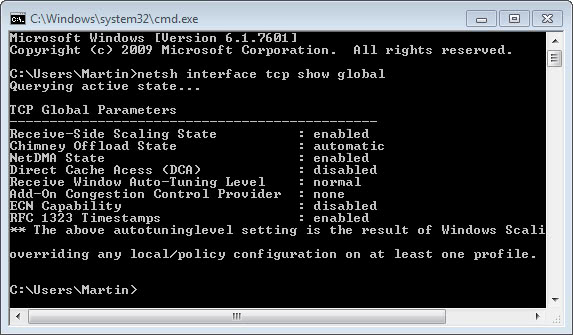 The command netsh interface tcp set global autotuning=disabled disables auto tuning which should lead to a speed increase if your computer experienced slowdowns and connection errors. Setting autotuning=normal returns to the default state for the autotuning parameter. Some suggest to set autotuning=restricted before disabling it fully or to autotuninglevel=highlyrestricted.

Update: Microsoft has released a Fix It program for the issue that users of Vista can run to resolve the issue automatically. Just download the program from the Microsoft Support website and run it on the computer that is affected by the issue. The Fix It as far as I now sets the auto tuning level to highly restricted.