If you ever tried to change Windows system path variables then you may have cursed Microsoft for creating such a tiny form to edit them in as the editor Microsoft created offfers not enough space to display all path variables at once.

The order of the entries is important as well since the first hit will be selected by Windows. Now if you take a look at your system paths you notice that the Windows form is completely useless. You can access those variables by accessing the System Properties in the Control Panel, clicking on the Advanced tab there and then on the Environment Variables button. If you highlight the path variable and click on Edit you know what I mean.

Update: Another option, useful if you run newer versions of Windows is to use Windows-Pause to open the System Control Panel applet, and to click on the Advanced tab there on its left side.

The window that is opening is displaying 30 or 40 chars only and you have to scroll to see all entries which is not really helping as you will never be able to see all variables listed on the screen at the same time.

Redmond Path 1.0 [via Shell Extension City] displays the path variables the way Microsoft should have done it a long time ago. I'm wondering why those things are never fixed in updates or new Windows releases. You can raise and lower variables, remove them, edit them and add new ones. 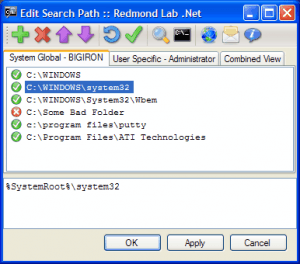 Update: Redmond Path appears to be no longer available. I suggest you check out the excellent Rapid Environment Editor instead which works with all recent versions of Windows.