I'm using Google Adsense for more than two years to monetize Ghacks and experienced some ups and downs. I thought it would be nice to create a graph that would put Adsense revenue in relation to the traffic that my website received. This could give courage to those webmasters who are currently struggling with their Adsense revenue especially when it dropped suddenly while the traffic remained more or less on the same level.

The red bar is showing my Adsense earnings (excluding Adsense for search and Adsense Referrals) from October 2005 to October 2007, the blue bar showing the traffic that my blog received in that time (the impressions counted by Google to be precise). For the sake of getting those values on the same chart I decided to divide my traffic by 10, just imagine it would be somewhere outside that graph.. 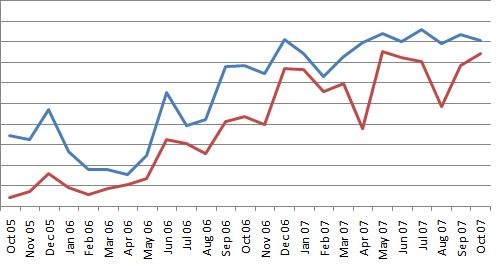 The interesting part is of course what we can learn from that graph. Here are my conclusions after looking at that graph.

Did you experience similar increases and drops since monetizing your blog with Google Adsense ? I used to panic a lot when I recognized huge drops in earnings but looking at this graph once again shows me that it does not make sense to panic. If traffic remains steady the revenue drop can more likely be attributed to holidays and advertisers stopping campaigns.