Freddy Pharkas, Frontier Pharmacist was an adventure in four acts created by Al Lowe, the creator of the Leisure Suit Larry series, for Sierra On-line back in the days when adventures were one of the hottest genres on the planet. This game is a usual Sierra On-line game with stunning graphics, sounds and a point system that rewards you for puzzles solved (and gets you crazy if you miss some points and can't find the way to get them).

You play Freddy in the year 1888 who decided it would be safer to quit being a gunslinger after someone shot of part of his ear and get a degree in pharmacy instead, move to the beautiful town of Coarsegold and open a pharmacy there. The adventure is a 2D point and click style of adventure with beautiful graphics and lots of humor. 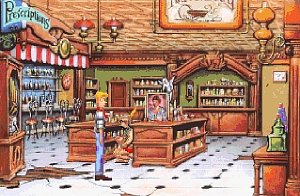 The graphics still do not look bad even after 14 years but don't except a top notch visual experience here. Two versions of the game exist and both can be downloaded from an unofficial fanpage. Independent Gaming lists the downloads as well which should mean that it is indeed ok to download the files.

I missed the adventure back then and was surprised of how good it was.

Update: The web site is no longer available and so is the download of the game which is unfortunate. While you find it on a couple of abandonware websites, I do not want to link to them as it is not really clear if they are allowed to list the game for download on their sites. If you are really looking for the game I suggest you check out eBay where it is sometimes listed for auction.