The Alien Breed series was a successful action game series on the Commodore Amiga back in the good old days. Several guys decided that it would be great to rewrite Alien Breed '92 from scratch and make it available on modern PC's as well. The game Alien Breed Obliteration has been released for some time now and really catches the Amiga spirit.

Graphics and sounds remind me a lot of my old Amiga 1200 computer as does the gameplay. The similarity to the Aliens series becomes obvious right from the title screen. The story is pretty basic though. You enter the alien base in your spaceship and have to get rid of them by advancing through 15 levels.

You can pick up weapon upgrades, extra lives, health packs and a lot more of stuff that is lying on the ground. Aliens come in randomly it seems which is quite irritating at first. One thing that struck me was that you do not have enough keys for all the doors in levels which can be irritating.

It happened that I was unable to continue because I used all keys and had no ammo left to blast the doors. I did not try going back which would probably load the last level again with all of its goodies. 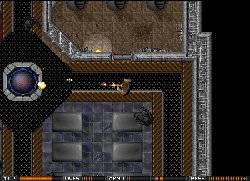 It is rather difficulty to shoot the aliens because it is only possible to shoot in 8 directions which means that you will have to move to the right position before you can hit them.

Alien Breed Obliteration does not have to be installed and can be run from any location. This is a great action game. Enjoy it.

Update: The official Alien Breed Obliteration website is no longer available. The game is still available on third party websites such as Acid Play from where it can be downloaded to the local computer system.