I'm sometimes wondering if some companies leak betas on purpose to create news about their upcoming products or if this is just the way it goes in the software business. A beta version of the upcoming Real Player 11 has been leaked and everyone may download it as of now from the official real website.

I personally do not like Real Player that much and use the freeware Real Alternative to play the content of that player. There might be however some users that actually like the player and would like to tinker around with the beta version. According to Cybernetnews the beta was not supposed to come out until the end of June. 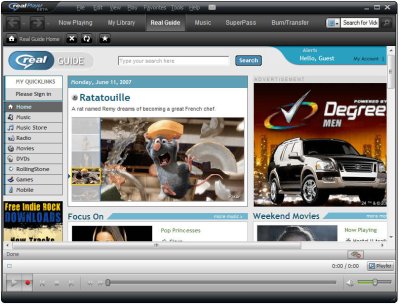 I can't really say much about the changes that have been implemented. One feature is a video downloader that lets you download videos from Internet video hosting sites directly and play them in Real Player afterwards. It will also ship with VCD / DVD burning options which are available depending on the edition of Real Player that you use (have purchased). The basic free version seems to ship only with VCD burning options.

While it seems to add several new features I have not seen anything that can't be achieved with other free tools. I can download the videos using several Firefox extensions or the Orbit Download Manager. Burning is of course more comfortable with real burning softwares such as Nero Burning Rom.

Update: You can download the latest version of Real Player, which is version 15.0.6 at the moment, from the official Real website.

Two versions of RealPlayer are available nowadays. The free RealPlayer basic, and the commercial RealPlayer Plus. The Plus version ships with the following options that the basic version does not ship with: