If you are looking for a great role playing game for the weekend you should definitely take a look at the excellent Last Scenario game. It reminds me a lot of those old SNES and Sega Genesis role playing games that were so much fun to play back then.

Last Scenario puts you in charge of a self proclaimed town protector named Hilbert who is nothing more than a boy at the beginning of the game. Hilbert is destined to become the savior of the world. If this sounds a little bit too cliche for your taste you should wait and see how the story unfolds.

Visuals of Last Scenario are excellent as is the game play. You move around freely most of the time just like in the old Zelda games. Random encounters appear if you are not in town and the fights are turn based. It is basically your choice of action (attack, spells, defend, items, run) and then the enemies. 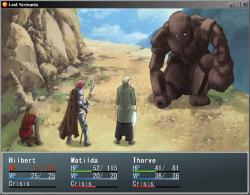 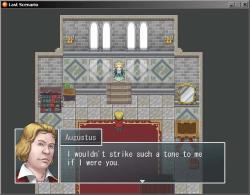 You do get some comrades over the course of the game which means that you have more options in combat. The game is not that tricky at the beginning until you meet the first big enemy in the caves. Make sure you are at least level 5 before you face the boss as you may face defeat otherwise.

Controls are the following: Space continues the dialog, X opens and closes the menu, and B selects an menu entry. You do move around with the cursor keys. Alt + Enter switches to full screen and F1 opens a few menu options. Great game, have to go back to playing it.

Update: The game is till available for free and runs fine on all recent versions of the Windows operating system. If you like it a lot, check out the large list of games that the developers make available on their site. You will find additional roleplaying games there that you can play.