Trackmania Nations is a free racing game for Windows that distinguishes itself from normal racing games by introducing a number of additional elements to the tracks. Do you remember Stunt Car Racer for instance for the Commodore Amiga? The game that featured a looping, mega jumps and other obstacles?

This game introduces all those elements again to the racing game genre but provides access to normal tracks as well. You may start with the 90 solo missions that remind me a little bit of the Gran Turismo missions. They are divided into Beginner, Advanced and Expert Training missions, and award medals if you beat the tracks in a certain amount of time. This alone is very challenging. 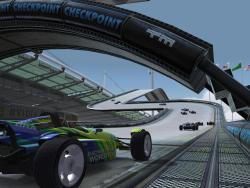 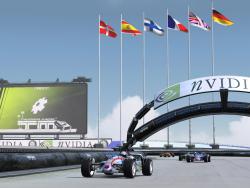 Besides the solo missions you can play Hot Seat, Lan and Internet as well. The real fun begins when you are playing on the Internet and competing against human players. Several servers are suggested after connecting to the main server offering modes such as Time Attack and Rounds.

Players compete for the best time in the Time Attack mode while Rounds is basically a race for a certain number of rounds. Team games also exist but I was not able to find out what they do.

You do need to download the game from the official site which transferred the game in great speed to my system and the latest Trackmania United patch after installing the game.

What I really like about the game is that is it easy to learn but hard to master. User generated content (new tracks for instance) is added constantly to the game and I suppose racing enthusiasts can have weeks of fun with this gem.

Update: Trackmania Nations is still available as a free game that you can play on your PC. The development company moved on in the meantime, and has released Trackmania 2 Canyon, a commercial game.

Update 2: Trackmania Nations is no longer available on the official site. You can download TrackMania Forever from it though which is offered as a free limited download or full game that you need to purchase.

The full game adds more environments, tracks, the solo campaign and other features that the free game version does not offer.

Here is the official trailer of the game to get you in the right mood.