I have always been a little bit obsessed with Ninjas since the first Shinobi game that Sega released back in the days. This continued with Tenchu on the Playstation and numerous Ninja games and movies. It was always my childhood dream to become a stealthy deadly assassin, hehe. Well, I found a nice - but short - flash game that lets you play, I think you guessed it already, a Ninja.

You have to make it through ten levels to rescue a woman (princess, geisha ?). To do this you have to cross the levels and beat all the enemy guards who are defending the captured woman. You only have a limited assortment of techniques at your disposable. Amongst them are the infamous wallrun, the backflip and the quick short slash. 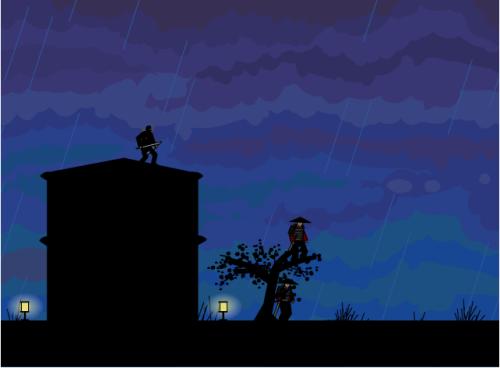 The best way to defeat the guards is of course the silent way. Approach them from behind and retreat. If guards spot you they attack with swords, bows and lances and they will most of the time beat you as you only need to be. It also means that your rating for that level will be reduced. You only get a master rating if you have not been spotted in a level at all.

You do receive a final rating after all levels which surely adds to the replay value of the game. It does not take long to complete all levels, just the right game for a short break.

Update: The ninja Flash game is still available at the original location it was posted on. Here are the controls that you need to control your ninja: