Colonization was one of those games that made Sid Meier, the creator of wonderful games such as Pirates and Civilization famous.

Colonization was one of the best games that I ever played, it was highly addictive and had some resemblance to Civilization.

You picked one of four nations and set out to colonize the new world. You had to deal with Indians and the other powers and in the later stages with your own European motherland.

Your first task in the new world was to create some flourishing towns that would produce goods that you could sell in Europe. Many people left Europe at this time and this is also reflected in the game.

You can load your ships with craftsmen, convicts or priests and use them in the new world. All colonialists were able to gain experience which had the result that they would for instance produce more goods for you or shipped with weapons or other tools already equipped. 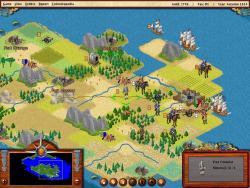 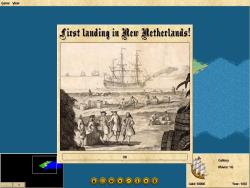 It was possible to live peacefully with the Indians trying to convert them to your faith in the process which would add some Indian converts to your people. Indians on the other hand had treasures and it was another strategy to fight with them to gain access to those treasures.

It was essential to conquer areas that would supply your colony with the needed resources. The only other way to get those resources was to pay a lot of money in Europe for them to ship them to the colonies. You had the chance to recruit a famous people from time to time who would add some special features like faster ships or better production to your colony. Looks and plays great already, requires Java.

Update: New versions of the game are released regularly that introduce bug fixes and other improvements to the game. What's interesting is that you get to play more colonial powers than the four that were available in the original Colonization game. You can for instance play Russia or Sweden as well.