Game for the Weekend Toblo

Fast Paced Multiplayer CTF action, that's what Toblo is about. Two teams, the red and the blue team try to capture the flag of the other team and reach the own home base with it. The only weapon that exists in the game are the cubes that compose every structure in the game. Every player may pick up those cubes and either throw them at the enemy or destroy structures for better access to the enemy base.

The flags are located on top of structures at the beginning which have to be destroyed as well to reach them.

Toblo is a fast paced game that delivers those moments known to all capture the flag games. Running with the flag on your shoulders to your own base, dodging enemy fire is a sure way to increase your heart rate. It is fun, it is great, it is my game for the weekend. Enjoy playing it.

The download from the original location was not working, try this download instead if it happens to you as well. 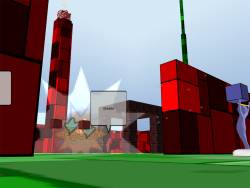 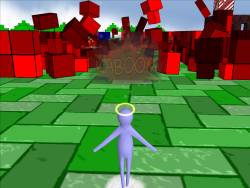 Update: The download is again available on the Digipen Institute of Technology website. I have tested the download and it is working just fine from there.

Toblo is a fast paced capture the flag game that takes place in a fully destructible block world. Pick one of two teams: angels or demons. Play against intelligent AI bots or against up to 4 friends over LAN. Pick up blocks off the ground or rip them from the environment. Toss them at opponents to knock them out. Use a bomb block for maximum destruction!

Tip: Use Hamachi to simulate LAN play if you and your friends are not playing in the same location.