Fun Fun Fun ! That is exactly what Babo Violent 2 is all about. It is a free multiplayer top down shooter. Players are armed balls that carry one of six weapons and try to beat the opposing side in exciting game modes such as capture the flag, deathmatch and team deathmatch.

It is currently possible to play on 13 different maps supporting between 2 to 32 players.

Just add a name and connect to one of the servers that are available when you start the game. Then choose a weapon like submachine gun or bazooka and enter the battle.

Servers had a good amount of players on them and I immediately felt at home and was able to frag the first enemies. You move your player with the WASD keys, aim with the mouse and shoot the weapon with the left mouse button and throw a grenade with the right one.

You may change weapons every time someone fragged you. I found the shotgun to be pretty effective and the sniper rifle the most difficult to handle in the beginning. There is lots of (ball) blood everywhere on the map after a few seconds which means it is not a game for minors but great fun for us adults. 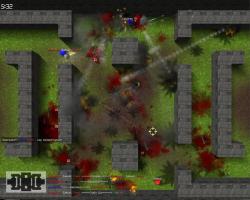 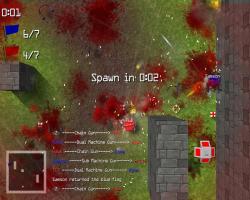 The size of the game is just a few megabytes and it is worth the download if you like multiplayer games of this kind. Hope you enjoy it, see you on the servers.

Babo Violent 2 is a fun game. You can download the game client and the server software from the developer website. The game has somewhat of a learning curve, but if you have played games like it before, you should feel right at home.

Update: The developers have released updates to the game that fix a number of bugs. The community furthermore has released a pro client that adds a number of - officially - unsupported features to the game, including hack protection, game balance changes and various optimizations aimed at competitive play.

Dedicate server software for both Linux and Windows has been released as well, which can be used to set up servers on machines running those operating systems.

All in all good changes that make a lot of sense and improve the game significantly.