Games for the Weekend 5 Base Invaders

The objective in the highly additive freeware game Base Invaders is simple: Defend your central tower. Hordes of aliens, among them the feared drillers, ninjas and bombers try to overcome the obstacles that the player creates to lay siege to the central tower.

Every structure in the game can be placed by the player, reminds me a bit of the famous Dungeon Keeper games by Bullfrog even though it is not playing underground but out in the open.

The attacking aliens become stronger with each wave that they send against your defenses. You are able to counter this by building advanced structures as the game progresses. Different kind of aliens require different strategies. The first aliens that attack your base can be eliminated by simply lifting them into the air and throwing them away.

The game looks pretty good for a freeware game but the most important factor of course is fun. And yes, Base Invaders is fun to play. 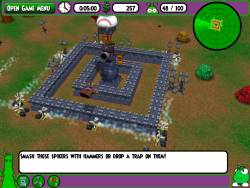 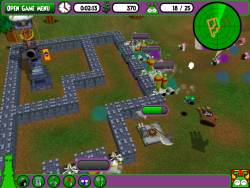 During your play, you will encounter a variety of attackers, from basic aliens that are not really that much of a threat to kamikaze aliens or squad leaders which are one of the most powerful attackers in the game.

The game itself mixes the game play of Dungeon Master with the tower defense genre, which in itself is a fun combination to begin with. When you look at the requirements, you will notice that it requires a DirectX 9.0c compatible video card, a two button mouse, and either Windows 2000 or Windows XP. The game does run fine however under Windows Vista or never versions of the Microsoft Windows operating system. If all else fails, Windows XP Mode should help out.

Update: The game is still available for download on the Digipen website. Updates have not been released in the past years, but that should not keep you from download and playing the game on your Windows PC.