Game for the Weekend 4 Battle for Wesnoth

The game of the week is a strategy game called Battle for Wesnoth. Maybe some of you know the classic games Shining Force by Sega, Final Fantasy Tactics by Square and Fire Emblem by Nintendo. All are turn based strategy games - so is Battle for Wesnoth, which can be downloaded for free for Windows, Mac and Linux.

Wesnoth offers a charming fantasy setting full of elves, orcs and magic. You may try the tutorial first which gives you a good understanding of the games basic features and commands. After that I suggest you head right for one of the four campaigns which can be best described as a series of battles.

You begin each battle with a certain amount of troops all with their own distinctive advantages and disadvantages, and may recruit new troops if your leader is currently in a castle.It is important that your leader is in the castle as it is the only way to recruit troops.

While you may move the leader around just like any other unit, you should be careful not to expose the unit too much as it is a high profile target for the enemy.

The types of troops you can recruit depend on a number of factors but it usually consists of a mixture of classic medieval units and fantasy units that you can recruit. Some units have special abilities that may come in handy during fights. The Shaman unit heals all adjacent units for 4 hitpoints per turn for example. 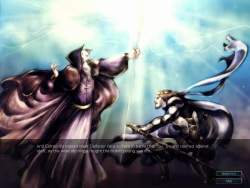 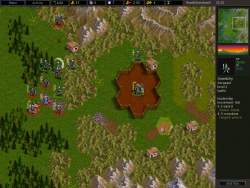 Units gain experience by fighting enemy troops and reach a new level once they have accumulated enough experience points which not only makes them tougher but may also advance their class. A mere Elven fighter may be turned into a tougher Elven Captain or Hero upon reaching level 2.

Terrain has influence on battle outcome as well. If your archers are attacked by knights on a plain field they are at a clear disadvantage while they may do better when they are standing in a forest. The same is true for attacking from water for example which makes your units more vulnerable than attacking from a regular field.

Another great feature is the multiplayer part of Battle for Wesnoth. Once you got sick of beating the AI you may want to try and beat some human opponents in the multiplayer mode. You may join the official server, host a network or hotseat game or join a game. Multiplayer is were the real fun begins, it is always more awarding to beat a human player than the computer and even if you loose you learn some valuable lessons that the computer can't teach you at all.

To conclude everything I said. Battle for Wesnoth is a great game. And it's free, what are you waiting for?