Microsoft Edge 106 has been released to the stable channel. The update, which is based on Chromium 106 brings various security fixes, an improved SmartScreen, and a new feature called the Command Palette.

The Command Palette is a tool that can be handy for regular users and web developers. The command bar feature was introduced in Microsoft Edge 105 Canary, in July 2022. Since it is an experimental feature, the option is not enabled by default, you need to toggle it manually in order to use it.

How to enable the new Command Palette in Microsoft Edge

2. Search for command palette. You should see a new setting in the results.

3. Its default value is set to "Disabled", click on the drop-down menu and change the setting to Enabled.

4. Restart the browser, and use the hotkey to trigger the feature, Ctrl + Shift + Space.

5. A large text box will appear at the top of Edge's interface (near the address bar).

Using the Command Palette in Edge

Start typing something in the box, and the browser will display some results. Highlight one of the options in the list, and hit the enter key to execute the corresponding command. It is quite similar to the tool in Microsoft Visual Studio and PowerToys.

I mentioned that the Command Palette is not necessarily a developer-centric tool, and that it can be handy for all users.  Here's how you can use it for tab management. Enter the word tab and Edge will display a set of tab management actions that you can choose from, such as open tabs, switch between tabs, search your bookmarks, add site to bookmarks, history, etc.

You may also use it to open the browser's tools such as the task manager, extension store, etc. This can be handy since you can do all these tasks without leaving the current tab, or clicking on the menu and navigating through the options. 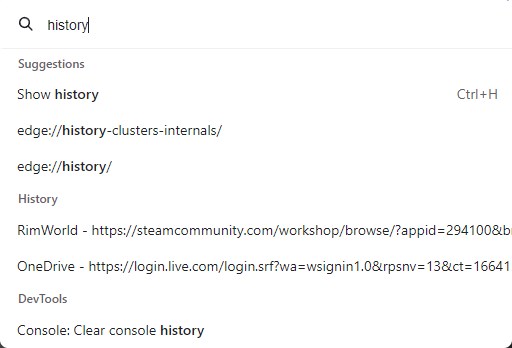 The Command Palette in Microsoft Edge can be used for advanced tasks without opening the Dev Tools first. For instance, you could use it to emulate a mobile device, this command will open the view the mobile version of the current web page in DevTools, thus allowing you to test how the website works on touchscreen devices. 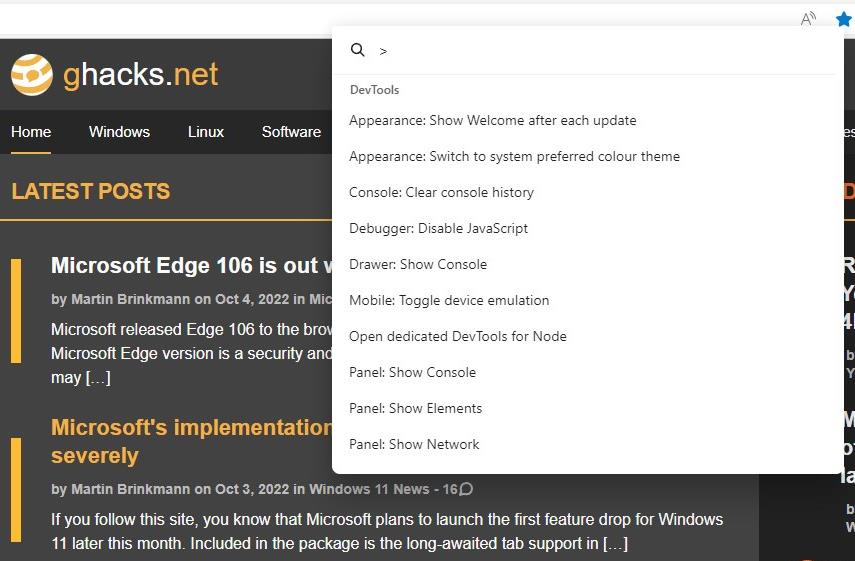 If you want the tool to only list DevTools options and exclude regular results like tabs, history, you should include the > before you start typing the keywords. This will filter the results displayed in the box accordingly, you can follow it up with advanced commands like Show Console or Show Snippets, or simply press the down arrow key to access all commands in the list.

The keyboard shortcut, Ctrl + Shift + Space could conflict with other applications and extensions, e.g. it does for me with the Simple Translate add-on. So, you may want to change the keybinding in the third-party tool to prevent it from being triggered accidentally. Microsoft has uploaded a video to explain how the new DevTools work in Edge 106, the video also mentions that the hotkey for the Command Palette will be changed to Ctrl + Q in future versions. A feedback thread on GitHub says this change will come in to effect when Microsoft Edge 108 is released, it is expected to be available in the week of November 1st in the beta channel, and will be rolled out to the stable channel in the first week of December.