Microsoft has released Windows 11 Insider Preview Build 25201 to the Dev Channel. The update brings an expanded view to the widgets board, removes the new Search bar from the Taskbar.

Expanded view in the Widgets board

Microsoft has added a new view mode for the Widgets board. It's called the Expanded view.  When it is triggered, the Widgets panel that rolls out from the left side of the screen, will switch to a window-like view in the center of your monitor, to show more content on the screen.

You may switch between the expanded view and regular view by clicking the button in the top right corner of the panel, next to the add widgets button. Windows will remember your preference, if you close it in the expanded view, it will use it the next time you access the Widgets panel.

The feature is being A/B tested, and hence is not available for all users.

The large Search Bar which was introduced a few months ago, in Build 25158, has been removed. Microsoft has confirmed that it has concluded the tests for the Search bar. This is likely a result of backlash from users who criticized the appearance of the search bar.

View search results as you type in File Explorer search

File Explorer's search tool will now show results as you type your query, i.e. you don't need to press the Enter key to view the results. The file manager will also display results from files stored in the cloud. This feature isn't available to all users yet, so I couldn't test it.

The Game Pass widget now allows you to sign in to your account. When you are signed in, the widget will display a list of games that are available to you, along with your recent activity, i.e., the games that you played recently, and clicking on a game's banner will open it. 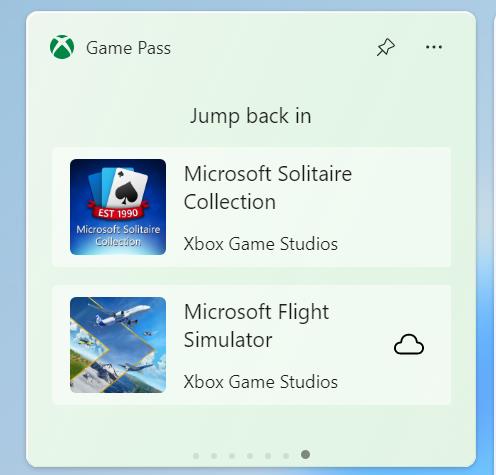 Note: The option to sign in to the widget is not working correctly, it opens the Xbox app as if to prompt you to sign in, even if you're already logged in to your account.

The issue that was causing a bugcheck when moving the mouse in certain games has been fixed. Pinyin IME can be used in the chat box of games. A memory leak that occurred when closing File Explorer has been mitigated. The default folders will be pinned to the quick access panel after updating to Build 25201, even if you had previously unpinned them.

Interacting with the Taskbar's Desktops flyout should no longer cause explorer.exe to crash. The Taskbar overflow's flyout will display apps in the correct order for Arabic and Hebrew language users. A bug that was preventing OneNote from opening via the pen click has been patched.

Microsoft says that it has fixed an issue that was causing sporadic Settings app crashes. Dragging and dropping a snap group in Task View to another desktop should no longer cause Explorer.exe to crash. Trying to watch videos in some UWP apps was leading to a crash, and rotating a tablet could result in a black screen displayed briefly. Both issues were related to a DWM crash and have now been fixed. A bug that was causing Windows Sandbox to result in a black window on some PCs has been fixed.

Windows 11 would display an error when trying to connect to Wi-Fi networks, it would say “it is not possible to connect to this network”, this issue has also been resolved.

There is one new known issue in Build 25201. Content in the widgets board may animate out of view before the panel resizes when you switch to the new expanded view, This issue only affects right-to-left display languages such as Arabic.

Build 25201 resolved a problem I had with the Search tool (mentioned in the fixes section). Search used to crash (since the previous flight) whenever I tried to access it from the Taskbar icon, or tried to search for something via the Start Menu, it seems to be working properly after the latest update.