Firefox 72 may block fingerprinters by default

Standard tracking protection functionality is enabled in Firefox by default. Users of the web browser may adjust the protective feature by setting it to strict or custom. Strict and custom, the two other available presets, include protection against fingerprinters already. 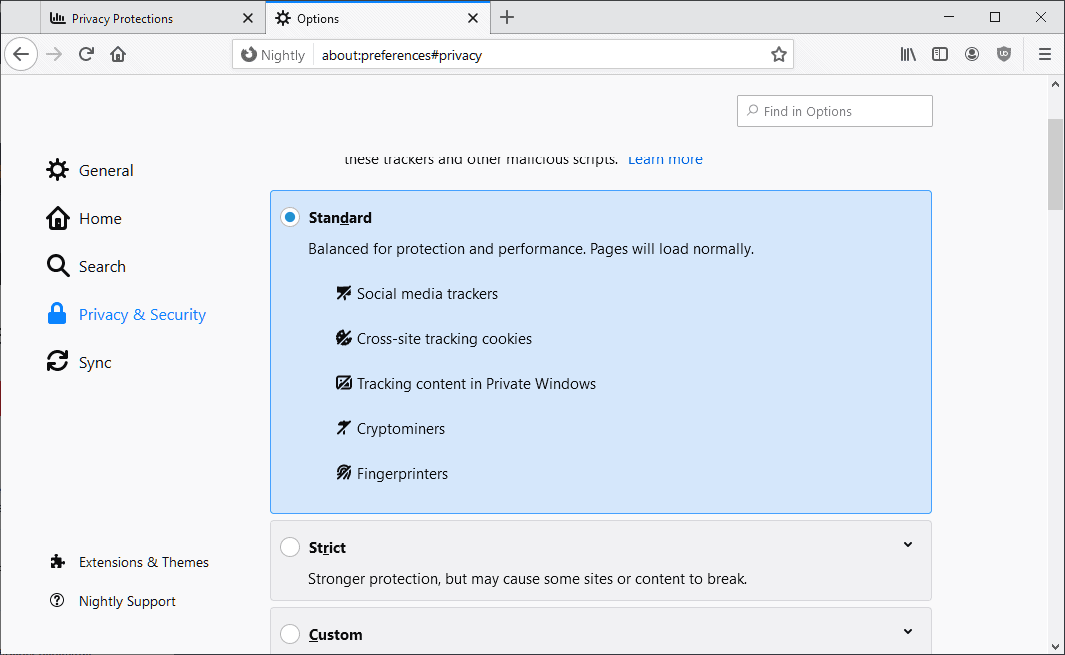 Starting in Firefox 72, Firefox may block fingerprinters by default as well as part of the standard preset.

Mozilla added the blocking of fingerprinters to Firefox 72 Nightly and plans to test the integration. Based on the outcome of the test, fingerprinting protection may become a standard blocking feature in Firefox 72 Stable or be reverted.

Compatibility issues play a big part in the assessment of the feature. Some, legitimate, sites may break or functionality on legitimate sites may break, if fingerprinting is enabled. If the breakage is too severe, Mozilla may revert the decision.

Fingerprinting refers to methods that use data that is provided by the browser or user activity for tracking. All web browser reveal some information when sites are loaded. Information may include the user's location in the world, language settings, screen resolution, and other data. Sites may run scripts to gather more data. The main idea behind the data gathering is to generate a fingerprint based on the data to identify the user when the same or other sites are visited.

Fingerprinting is used to identify a user or user agent by the set of properties of the browser, the device, or the network, rather than by setting state on the device. For example, a party which infers the set of fonts a user has installed on their device and collects this information alongside other device information would be considered to participate in browser fingerprinting.

Tip: check out our master list of privacy tests that you may run to find out what your browser reveals about you.

Firefox users may control the browser's tracking protection feature in the following way:

Fingerprinting protection is a welcome addition to Firefox's arsenal of tracking protections. Users can enable the protection already in Firefox 70 Stable, e.g. by switching to custom protections and enabling the option.

Now You: What would you like to see next added to Firefox's Tracking Protection feature? (via Techdows)

Previous Post: « Copy PlainText is a Firefox extension that lets you copy text without the formatting style
Next Post: Mozilla revenue dropped in 2018 but it is still doing well »