Google is working on a new manifest for Chrome extensions that defines the capabilities that extensions have in Google Chrome.

The manifest is available as a draft currently which means that it is not set in stone. One of the changes impacts most adblocking extensions for Chrome significantly if it passes in its current state.

Google plans to limit an API that most content blockers use currently and replace it with a new API that is limited as well. Core limitations include a fixed limit for the number of blocking rules that extensions may support. Google set the limit to 30,000 in the draft; popular blocking lists have more than double the number of entries already, and that does not even take into account options to use multiple lists. Google knows about that but has not adjusted the limit since draft publication.

Google Chrome is based on Chromium code to a large extent. The changes that Google proposes could impact other Chromium-based web browsers such as Vivaldi, Opera, Brave, or the new Microsoft Edge browser as well.

The big question is this: will extensions be limited on these browsers as well if Manifest launches in its current state? There is no catch-all answer as it depends on a number of factors.

First of all, one has to realize that the change affects extension capabilities only. While the change might affect extensions in all browsers, it won't affect browsers that come with their own ad-blocking capabilities provided that users of these browsers use these already or switch to them when extensions lose the effectiveness. 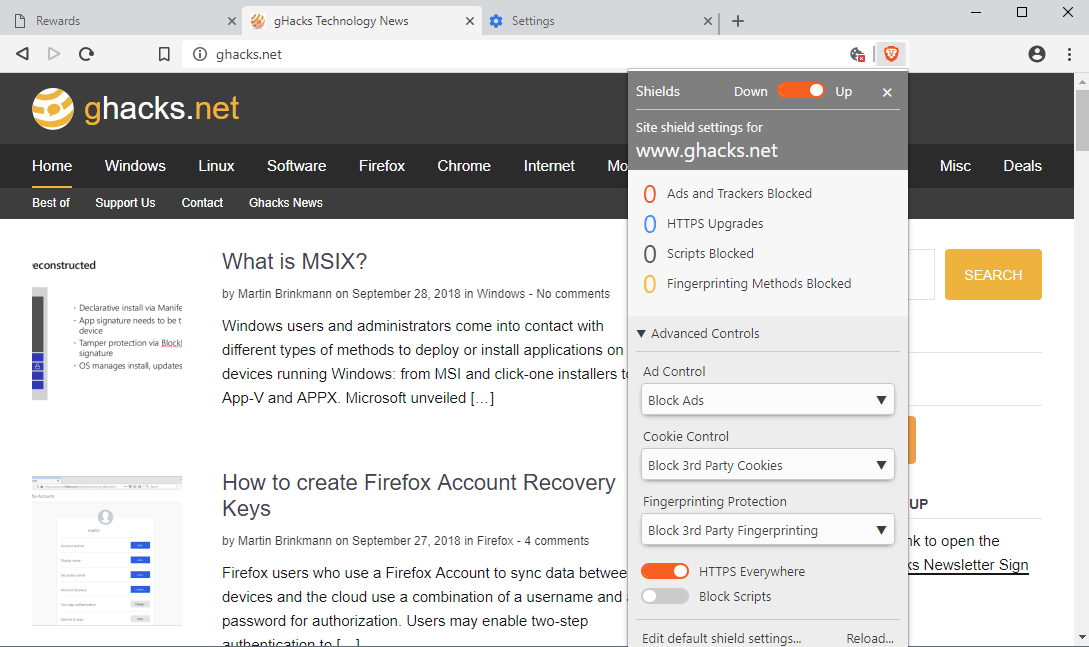 Brave and Opera include ad-blocking functionality by default; these will continue to work just like before regardless of the new Manifest file for extensions.

Third-party browser developers who use Chromium as the source can change the Manifest or code in the browser to change the limits or keep the old API supported.

The companies have not revealed their position on Manifest V3 if it lands in its current state.

The good news is that whatever restrictions Google adds, at the end we can remove them. Our mission will always be to ensure that you have the choice.

Vivaldi published a blog post on June 4, 2019 in which it highlighted the company's stance on the matter. The company noted that Google's current proposal would limit ad-blocking, privacy, and security extensions significantly. It made it clear that it would try and find ways around the limitations, e.g. by restoring the old API if possible, or even implementing a limited extensions store that would give extensions the capabilities that they require to work properly just like they do right now.

Vivaldi noted that Google's implementation is not final and that Google might change it or improve the capabilities of the new API to match those of the old.

Microsoft's new web browser uses Chromium as its core and as such will impact it as well. Microsoft operates its own extension store and allows the installation of Chrome extensions next to that.

Microsoft has not responded publicly to Google's Manifest V3 draft but since the company operates its own extensions store, it is in a better position already even if Google goes ahead with the plans.

The proposed Manifest changes impact other Chromium-based browsers. Third-party browser makers have options to reverse or mitigate the changes, e.g. through the use of internal content blocking functionality, restoring the old API or using their own extensions store with different Manifests (besides still supporting the Chrome Web Store).

It is certainly too early to come to a definitive answer. It all depends on Google and whether the company will go forward with the changes or modify them.

Ultimately, there is still Firefox which is not based on Chromium code that users may switch to.

Now You: Do you think Google will go ahead with the changes?

Previous Post: « How to disable search suggestion images in Google Chrome
Next Post: Fix chrome.exe appearing on the Windows Lockscreen »