The program detects limits and may patch the values to allow higher resolutions and refresh rates. It checks for certain limits and displays those that it finds in the interface. In the case of our test machine, DL-DVI, SL-DVI/HDMI, HDMI-DVI, SL-DVI on DL-DVI, TMDS.

You may download the latest version of the NVIDIA Pixel Clock Patcher from the developer's website. The program is updated regularly to address changes in newer drivers that Nvidia releases regularly.

NVIDIA Pixel Clock Patcher modifies the NVIDIA video driver to allow higher resolutions and refresh rates by removing the 165 MHz pixel clock limit for single-link DVI and HDMI, the 330 MHz limit for dual-link DVI, and the 400 MHz limit for SLI and 400/500-series GPUs. 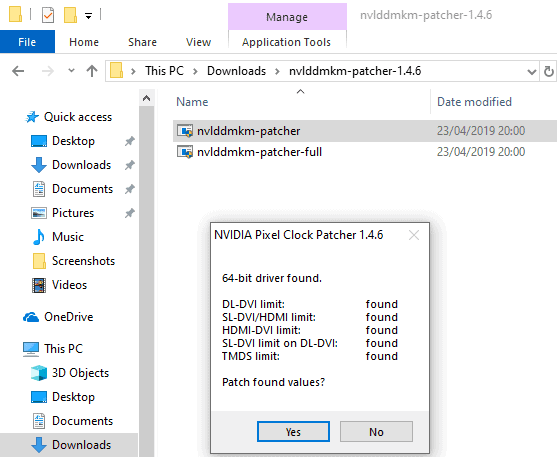 The archive that you download comes with two executable files:

The application detects existing limits on start. You may select "yes" to patch the limits or "no" to cancel the entire process. Nvidia Pixel Clock Patcher displays a notification after the patching. Note that you may need to reboot the system before the new options become available.

The application creates a backup and when you run it again includes an option to restore the defaults.

The current version has three known issues that users need to be aware of before running the patcher.

NVIDIA Pixel Clock Patcher is a specialized programs for Nvidia graphics processing units; most Windows users may have no desire to run this but some may find it useful to remove certain limitations.

Now You: What is your preferred resolution and refresh rate?

Martin Brinkmann is a journalist from Germany who founded Ghacks Technology News Back in 2005. He is passionate about all things tech and knows the Internet and computers like the back of his hand. You can follow Martin on Facebook or Twitter
View all posts by Martin Brinkmann →
Previous Post: « Sound Editor Audacity 2.3.2 update integrates MP3 Encoder
Next Post: About CCleaner's Easy Clean Mode »