Firefox might get a Super Private Browsing mode in the future - gHacks Tech News
ghacks.net

Firefox might get a Super Private Browsing mode in the future

Mozilla published the organization's Research Grants for the first half of 2019 yesterday. The 2019H1 funding series seeks answers to 12 research questions in the categories "Growing the Web", "New Interaction Modes", and "Privacy & Security".

In the latter, Mozilla states that it has an "interest in potentially integrating more of Tor into Firefox" and that this could lead to a "Super Private Browsing (SPB) mode" for Firefox users. 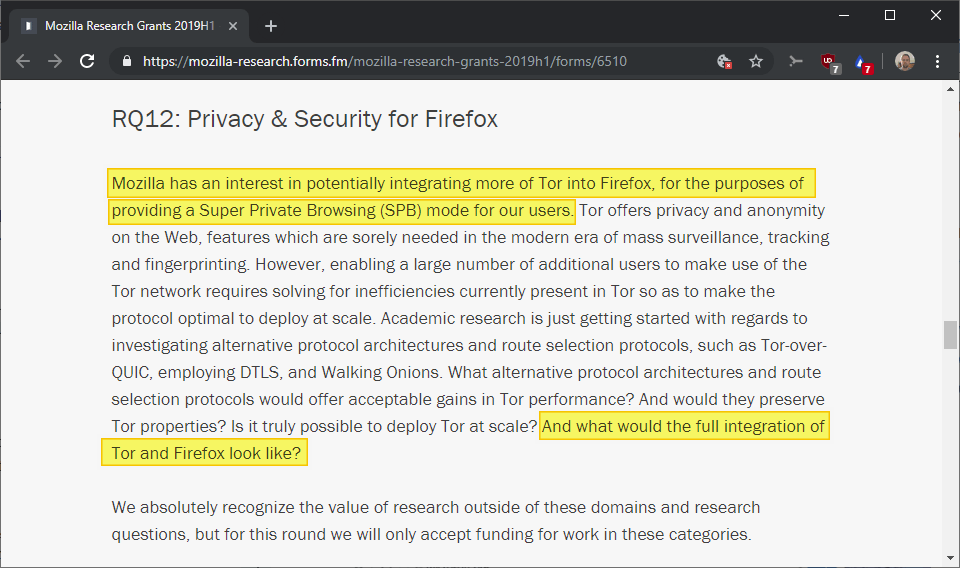 Tor Browser, a web browser based on Firefox ESR code that integrates Tor connectivity, is already available. Mozilla started to implement certain Tor features in Firefox as part of the Tor Uplift project.

The Mozilla Research Grant question goes beyond the Tor Uplift program as it suggests that Tor could be integrated in the Firefox web browser to power the browser's Super Private Browsing mode.

The following questions are asked:

Firefox has hundreds of millions of users; if only a fraction of those would start using an integrated version of Tor in Firefox, it would have to be ensured that the user experience would be acceptable or better.

Scaling is one issue, and Mozilla would like to know if new protocols would improve Tor performance to address the potential bottleneck. Ultimately, it would come down to finding efficient options to run Tor at a very large scale without compromising anonymity or privacy.

Tor integration in Firefox could potentially lead to the retiring of Tor Browser. The Tor development team could continue to work on Tor, this time directly integrated in Firefox. The solution would offer several advantages but also potential issues.

Tor Browser is based on Firefox ESR. Integrating Tor in Firefox (Stable), would lead to faster development cycles and more issues the team would have to address. Firefox ESR does not get all the new features that Mozilla implements in Firefox directly.

Now You: Tor integration in Firefox: good or bad idea?

Martin Brinkmann is a journalist from Germany who founded Ghacks Technology News Back in 2005. He is passionate about all things tech and knows the Internet and computers like the back of his hand. You can follow Martin on Facebook or Twitter
View all posts by Martin Brinkmann →
Previous Post: « Tor Browser 8.0.9 update resolves add-on signing issue
Next Post: Mozilla will fix add-on signing issue for older Firefox versions »