by Martin Brinkmann on February 14, 2019 in Firefox, Google Chrome - 27 comments

The developers of the free cross-browser adblocker SmartAdblock have released an updated version of the extension that introduces a number of improvements and optimizations.

We looked at the initial release version of SmartAdblock last month and found it to be a well designed extension. It blocked advertisement efficiently and included some nice-to-have extra features such as options to bypass adblock detectors and cookie notifications on sites.

One thing that we did not like to much was that it did not provide any control over the blocking other than to toggle it on or off.

The new version of the content blocker is already available on the Google Chrome Web Store and on Mozilla AMO. Users who have it installed already should receive the update automatically.

The main new feature introduced in SmartAdblock 1.09 is support for custom filters. 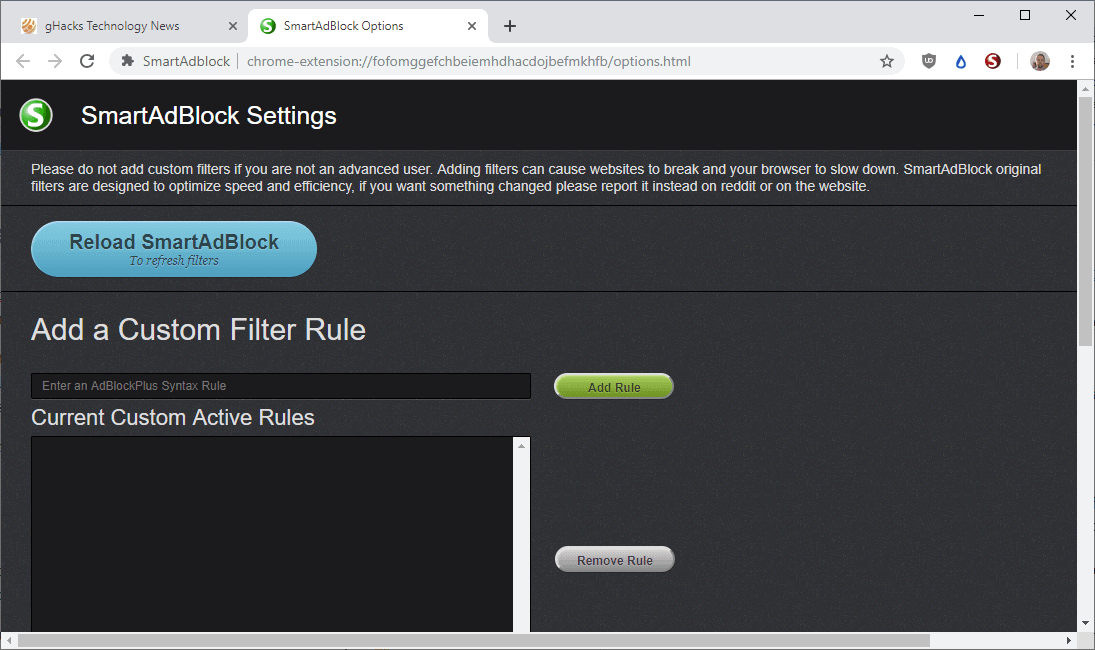 You may use the functionality to add custom filter rules or add filter lists to the extension. The extension will use those next to all integrated rules when it comes to blocking content in the browser.

Custom filters use the AdBlock Plus filter syntax. A detailed guide is available on the AdBlock Plus website. Just type a custom filter and click on add rule afterward to add it. Doing so requires some knowledge of website technology as you need to identify the elements that you want to block on specific sites. You may also add URLs of filter lists to add these all at once to the content blocking extensions.

The developers improved the extensions memory usage in the new release by fixing "some memory leaks" and optimizing memory usage. They claim that the extension is the adblocker with the lowest memory usage, and that it beats uBlock Origin and others fair and square (uBlock Origin is listed as the second best in regards to memory usage while popular choices such as Adblock Plus use a multiple of the memory).

SmartAdblock users ran into some issues with the initial version on select sites, e.g. Google Maps. Speed issues on sites like Google Maps or Gmail should be resolved in this version.

SmartAdblock is a set and forget extension for the most part that does a good job at blocking content.

The new version is a first step towards adding more options to the extension; I wish it would provide more information, e.g. display what is blocked, and give control over these elements.

Filter list support is a welcome step in the right direction, as is the extension's low memory use.The developers seem very responsive, users can make requests and report issues with certain sites and these seem to get fixed rather quickly.

Definitely an adblocker to keep an eye on.

Now You: Have you tried SmartAdblock?

Martin Brinkmann is a journalist from Germany who founded Ghacks Technology News Back in 2005. He is passionate about all things tech and knows the Internet and computers like the back of his hand. You can follow Martin on Facebook or Twitter
View all posts by Martin Brinkmann →
Previous Post: « Block certain recommended videos on YouTube permanently
Next Post: Firefox Extensions to use different storage type in Firefox 66 »