Visual C++ Installer / Uninstaller is a free program for Microsoft Windows devices to install or uninstall Visual C++ runtimes in one swift operation.

We talked about Visual C++ Redistributables before here on Ghacks and how you may get an ever-increasing number of them installed on your Windows PC over time.

The article links to downloads for the most recent Microsoft Visual C++ Redistributable packages, and you can install these packages manually. 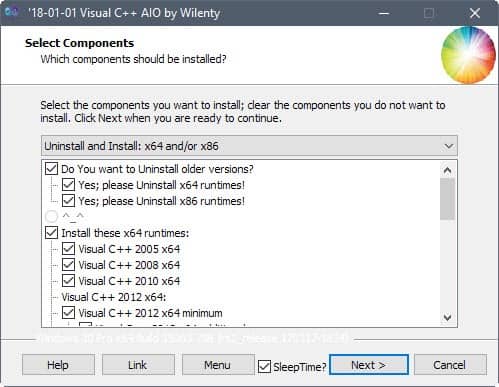 Visual C++ Installer / Uninstaller supports the removal of Microsoft Visual C++ runtimes as well, on the other hand, something that VC Redist Installer does not.

Note: You may want to create a backup of the system before you use the program to uninstall Visual C++ Redistributables.

You can run the program right after download; it does not need to be installed. Use the menu at the top to select the main action, e.g., uninstall and install, or uninstall or install only. The main action checks various boxes and acts as a preset.

You can check and uncheck boxes manually afterward to customize the installation and removal process.

The program comes with extra options that assist you when it comes to installing and removing Visual C++ runtimes. Click on menu in the interface and then in installed to list all installed Microsoft Visual C++ Redistributable packages. The PC I tested the program on had 35 of them installed. 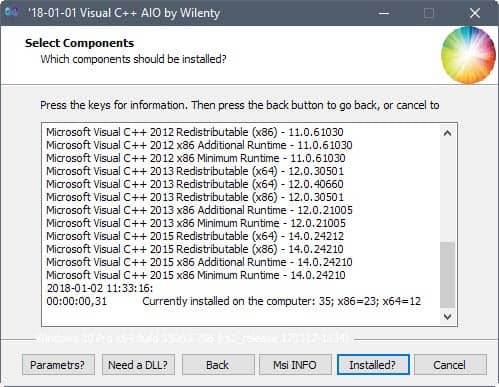 You can export the listing by selecting all and using Ctrl-C to copy the selection to the clipboard of the operating system.

You can use the program for different purposes.

The process of installing runtimes is straightforward. Select what you want to install and hit the next button. The program installs the component on the system.

Visual C++ AIO is a handy program for Windows for any user or admin who runs into issues with Visual C++ Redistributable packages. While it does not help you figure out which packages you need on a system to run a specific software, it handles anything else in excellent fashion.

Now You: How do you handle Redistributable packages on Windows?