Sometimes when yo try to install or run a program on your Windows system you may get an error message that a component it depends on is missing. This can for instance be the case if you do not have a particular version of the Microsoft .Net Framework or a Visual C++ Runtime installed. Some software developers include the runtimes and frameworks their programs depend on with the installation file, while others do not.

If the latter is the case you are left with the task of hunting down the correct version of the runtime or framework on your own. The error message may reveal additional information about the component that is missing giving you an edge when it comes to finding it online.

The basic idea behind the VC Redist Installer is to provide you with all important Visual C++ runtimes in a single installer. 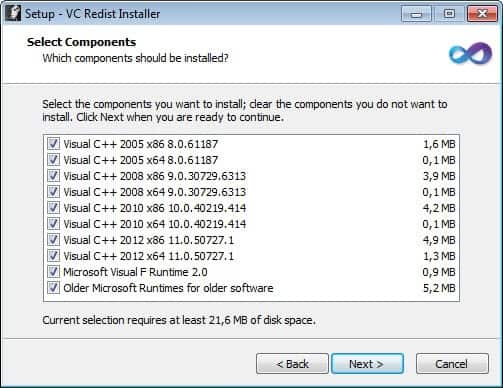 The program includes the following components:

The program is regularly updated with the latest versions of the runtimes. Please note that you need to launch the installer with administrative privileges on your system. When you do, you are presented with a list of all included components. Here you can then decided to install all components on the system or use the checkboxes to only install the components that you are looking for. The VC Redist Installer ships with all components included so that it is perfectly suited for offline installations.

You can alternatively run the program with the /VERYSILENT switch for a silent installation of all components that it includes. The program does not check for updates automatically, which means that you need to check the author's homepage from time to time to see if there is an update for the program available.

Previous Post: « Display the browsing history of multiple browsers with BrowsingHistoryView for Windows
Next Post: Syncbox makes your local data available on the Internet »