Outlook Tools 3.0 is the latest version of the popular Outlook management and troubleshooting tool for Microsoft Windows devices.

It is the first release of the program since 2010. We reviewed Outlook Tools 2.3 back in 2010 when it was released and concluded back then that it was a handy program to have for Outlook users. 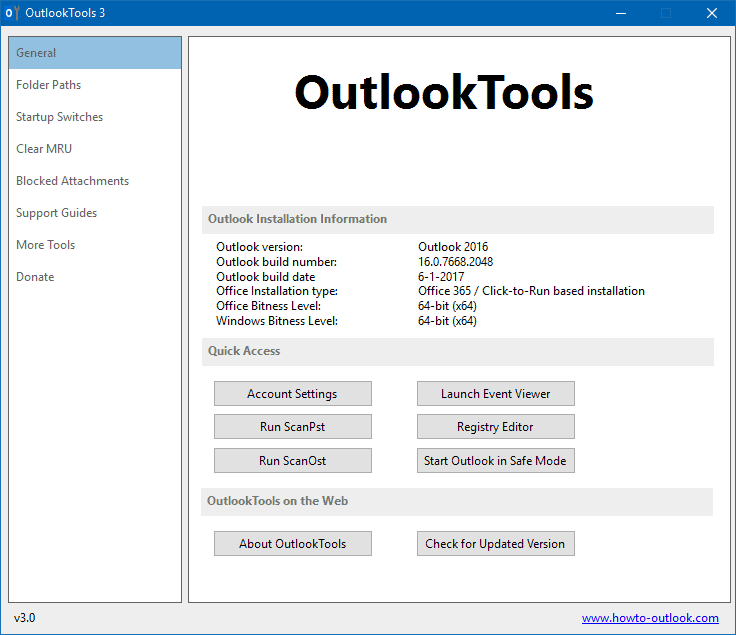 The main focus of development was to improve the program's compatibility with all versions of Outlook and Windows released after the release of Outlook Tools 2.3 back in 2010.

The new version of the program ships with additional features besides that:

The core functionality of the application has not changed however.

It provides you with quick access to Outlook settings and the data folders, as well as several tools that are built in. This includes a tool to unblock attachment types that Outlook blocks by default (similarly to Attachment Unblocker which we reviewed back in 2010).

You may also use Outlook Tools to run Outlook with command line parameters. While you can do so directly from the command line or batch files as well, the built-in option is just a click away and does not require any form of typing. Each switch that is supported is explained when you hover the mouse cursor over it.

Another handy feature is the ability to click most recently used (MRU) lists that are maintained. This is also just a click away.

Outlook Tools 3.0 is a welcome release that must have come as a surprise to many considering that the release before that dated back to the year 2010.

The new version improves compatibility with all recent versions of Outlook and Windows, and is a must have upgrade therefore for any user of the application.

Outlook users on Windows may also want to keep the program in reach, as it may be useful at times to control Outlook or troubleshoot it.

Now You: Which email software or service do you use predominantly?