When you buy a video card for gamers, it is often the case that you get a game or multiple games along with it.

Up until now, all you needed was that code to get the game to activate just fine on the system. While many customers did activate those games probably, some decided to sell the game codes instead.

This makes sense from a customer perspective as you could make some money back if you are not interested in a particular game, or already own it. 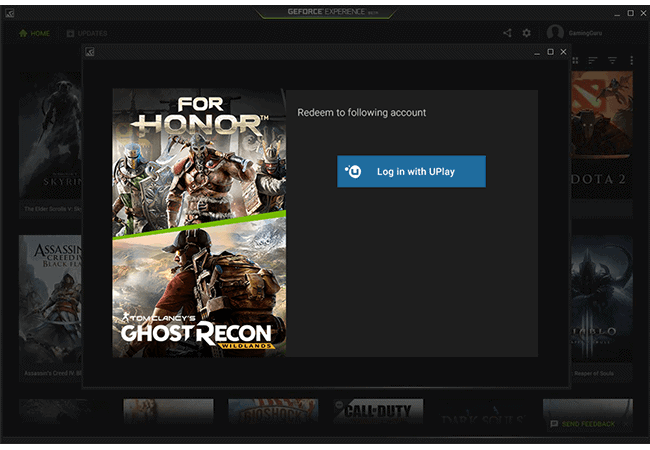 Nvidia decided to limit the practice by tying (some) game promotions to the video card model they were offered with.

This means that the code won't be useful anymore to others unless they own the same video card model.

The first game bundles featuring the change is the "Prepare to Battle" bundle. The games For Honor and Ghost Recon Wildlands are tied to the purchase of the GeForce GTX 1070 or GTX 1080 video card.

Another thing that is new is that you cannot redeem the code on the Nvidia website, but need to use the company's GeForce Experience software for that.

This additional requirement is problematic for users who don't want GeForce Experience on their system. The only option that I see is that they install the software, register an account, enter the promo code for the game, get the game linked to their gaming account, and uninstall GeForce Experience afterwards.

GeForce Experience checks the video card, and allows activation only if the right card is connected to the PC. Without GeForce Experience, there is no way of activating the game anymore on the PC.

Game coupon codes offered as part of a qualifying GPU or PC purchase are intended for use by the purchaser. As part of the coupon redemption process, NVIDIA uses GeForce Experience to perform a hardware verification step to ensure the coupon code is redeemed on the system with the qualifying GPU

Ars Technica got confirmation from Nvidia that only the video card model, and not its serial number, is checked in the GeForce Experience software.

This means that it is still possible to sell the code, but the range of potential buyers is severely limited as they need to have access to the same video card to activate the game on their end.

Another thing that is different is that you don't get a key anymore for manual activation on third-party game portals like Steam. The system has been designed instead to directly link to the game platform through GeForce Experience. Basically, what is happening is, that the game is added to the account you select during the activation phase.

The game is linked to the account from then on out. You can switch video cards or entire systems later on, and still play those games on them.

Nvidia released instructions for redeeming games through GeForce Experience on the company website.

The new limitation makes it difficult to sell game promo codes that come with video cards. It sounds as this is a new option for Nvidia and the game maker to limit the reselling of promo codes for games, but not mandatory for all video card bundles that will come out in the future.

Now You: What's your opinion on the new limitation?

Martin Brinkmann is a journalist from Germany who founded Ghacks Technology News Back in 2005. He is passionate about all things tech and knows the Internet and computers like the back of his hand. You can follow Martin on Facebook or Twitter
View all posts by Martin Brinkmann →
Previous Post: « Nintendo releases Fire Emblem Heroes
Next Post: Play Classic StarCraft and Brood War expansion for free »