If you are running Spotify Free on your desktop computer you may have noticed that advertisement is suddenly being launched in the default web browser when the software is running.

Spotify Free is the advertisement driven limited version of Spotify. You can use Spotify more or less as you see fit -- within certain limitations -- and get ads in the software as banners on certain pages and as audio advertisement.

Reports are coming in that certain advertisement campaigns in Spotify Free are triggering advertisements to open in the default system browser.

Basically, what is happening is that users notice that advertisement or pop ups are loaded in short intervals -- ten minutes seems to the the sweet spot -- whenever Spotify Free is running. 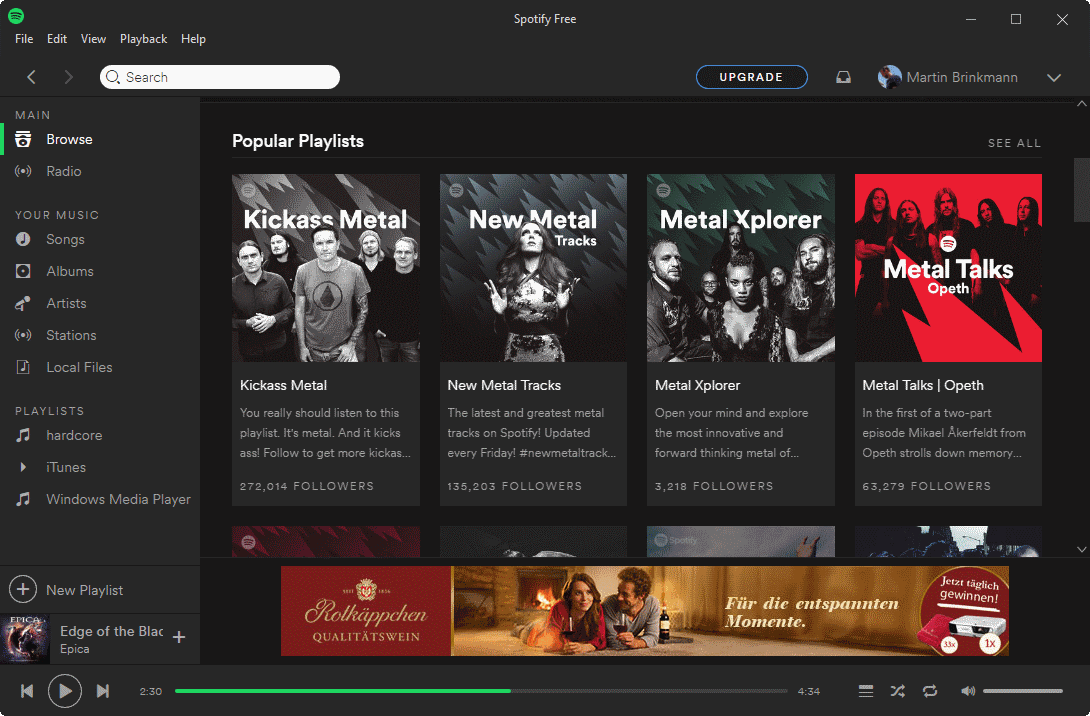 Scans of the system with up to date antivirus software revealed no hits, and the issue has been more or less confirmed by users who only ran Spotify on their systems to find out if the software was responsible for the behavior.

Only certain banner ads displayed in the Spotify Free client seem to trigger the loading of advertisement in the default web browser.

It appears that certain campaigns are designed to trigger the loading of advertisement in the default system browser even though that should not happen.

The issue is not limited to Windows either, as users on Mac are reporting that advertisement pages were opened on their devices as well while running Spotify Free.

What's particularly worrying is that the ads are not safe for work. Some users reported full nudity advertisement, others ads for betting services.

Same problem here, Just listening to music on my work laptop while writing some unit tests. And blam full frontal nudity across the screen.

Started it and a few secs later ads! And the datingsite is not nice, nudes on frontpage!

This is not the first time that Spotify Free users are experiencing issues when using the client. Users reported similar things happening on their devices about a year ago on the official Spotify community forum.

There is little that you can do right now to prevent banner ads to spawn advertisement in the default system browser when running Spotify Free.

You might want to try switching to the web player instead and use it for the time being. It is unclear if web player ads show similar behavior, but browser's may be better suited at blocking those requests or at least displaying warnings to users before loading these ads.

Now You: Did you notice the issue while running Spotify Free?

Article Name
Spotify Free opens web browser ads
Description
If you are running Spotify Free on your desktop computer you may have noticed that advertisement is suddenly being launched in the default web browser when the software is running.
Author
Martin Brinkmann
Publisher
Ghacks Technology News
Logo

Martin Brinkmann is a journalist from Germany who founded Ghacks Technology News Back in 2005. He is passionate about all things tech and knows the Internet and computers like the back of his hand. You can follow Martin on Facebook or Twitter
View all posts by Martin Brinkmann →
Previous Post: « YouTube's Community feature launches
Next Post: Amazon's Music Unlimited streaming service launches »