NeuralStyler is a free Prisma-like program for Windows and Linux devices that you may use to apply filters to videos to turn them into art (not that they are not art before that..).

I enjoy playing around with Prisma on my Android device, especially since the company behind it updated it so that it does not require a network connection anymore to apply filters to photos on the device.

NeuralStyler works pretty much in the same way, only for videos and on the desktop. Basically, what you do is pick a video from the local device, select one of the available styles that you want applied to it, and hit the create button to create a new version of the video. 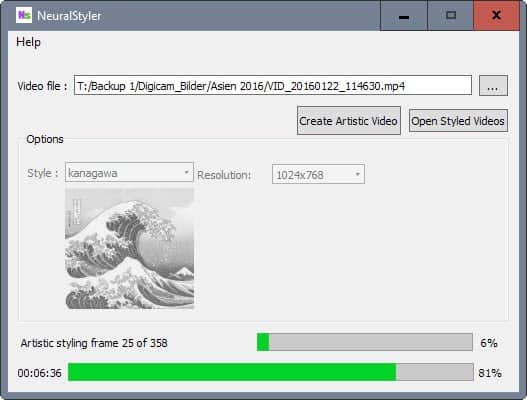 NeuralStyler ships with nine different styles that it can apply to videos. Those include styles by famous artists such as Van Gogh or Kandinsky, but also styles associated with individual works of art (The Great Wave off Kanagawa) and styles not associated with either.

The interface displays a preview of each style so that you get a rough understanding of it, but not how it will apply to the video that you have selected.

The only other option that you have is to set the output resolution for the video. The default is set to 320x240 which you may want to increase. The maximum resolution available is 1024x768.

The processing time depends largely on the size of the video, and here specifically its frames, and the performance of the computer.

Good news is, all the processing happens on the local computer system. There is no uploading involved whatsoever.

NeuralStyler lacks options. There is no stop button for instance to pause or stop the process once you hit the go button. You may close the application window to terminate it forcefully, but that is probably not the best option.

A preview option, to render a single frame to see how the output looks like would be mighty useful as well, but is missing.

Results range between very impressive to very poor looking. It seems to be a hit and miss currently, at least when I tried the software and converted several videos that I took during last year's Asia trip.

Generally speaking; videos with pictures that move little convert better than videos with lots of camera movement. The output quality depends on the style as well, with some styles working better than others.

NeuralStyler is an interesting software program. While it certainly has its issues in this version, it shows a lot of promise as well. Styles can be created by anyone for instance, and the website will list them for download if users submit them to the project.

The hit and miss nature of the application is a bit of a problem, especially if you wait hours for the rendering to complete.

This could be improved by implementing a five or so second preview feature in the application that would show how a particular style would look like when applied to a video.

For now, your best bet is to cut videos manually and apply filters to a small test sample to avoid this.