My Surface Pro 4 ships without optical drive, and so do quite a few modern laptops and desktop PCs. It seems that optical discs are on their way to a niche existence; but this may come with a couple of issues.

For instance, it is no longer possible to burn an ISO image of Linux Mint, Windows, or other operating systems to disc to start the installation process. Since you cannot insert discs anymore, you need to rely on SD cards or USB Flash drives for that.

Companies may provide you with tools to copy ISO images to removable drives. You may also use third-party tools like XBOOT or YUMI to burn ISO images to USB Flash drives or SD cards. 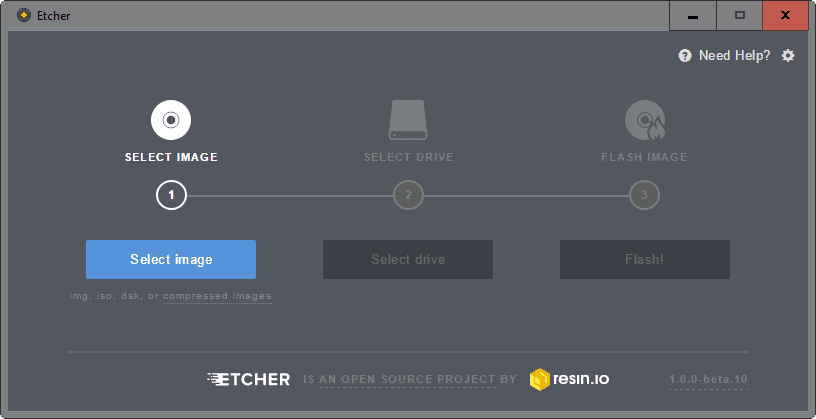 Etcher is offered as a beta release for Windows, Linux and Mac devices currently. The download is quite large -- 81 Megabyte on Windows -- but the functionality that it provides may be worth it.

Note: The program attempts to connect to Internet servers regularly. These appear to be maintained by resin.io, the company that created the project. It is unclear why those connections are made. Could be an automatic check for updates.

The interface is streamlined for ease of use. The whole process consists of three steps that are outlined in the interface on start.

It starts with the selection of an image. The application supports various image formats including iso, img, dsk as well as gz, bzz and xz.

Etcher tries to identify the correct drive automatically after you have selected an ISO image. The program jumps to the third and final step -- flashing -- automatically in that case.

You may change the drive, which is useful if more than one removable drive is connected to the PC, or if the automatic identification of the drive failed.

Etcher displays progress information in percent, the current write speed, and the estimated time of completion. 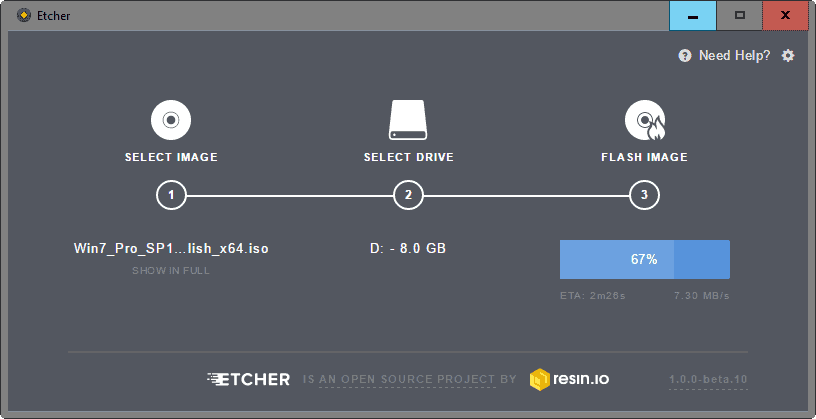 The application validates the copying of data after the copy process to make sure everything copied correctly. This is an important step as it ensures that you won't run into corruption issues when running the operating system or installing it on a device.

The complete process takes a bit longer because of the validation but it is worth it and should not take longer than a couple of minutes tops. You may disable validation in the settings if you don't require it.

Also, you may display the reporting of errors, and that the drive is unmounted when the operating completes successfully.

The final page displays whether the operation completed successfully. 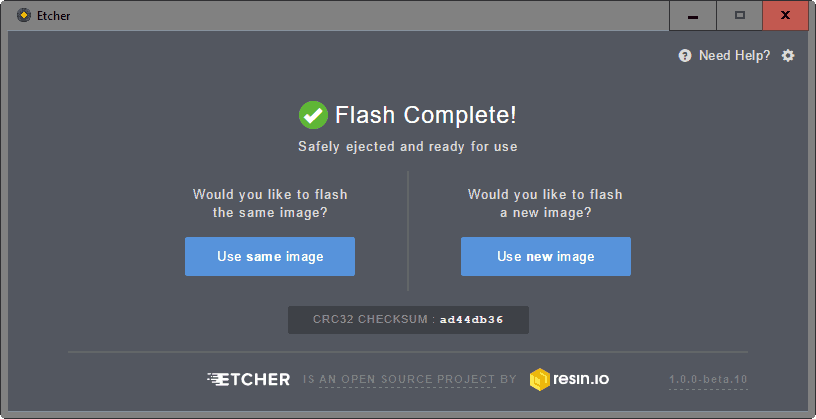 You find the CRC32 checksum on the page, and get options to flash the same image or a new image.