Next to the two messaging applications Allo and Duo, and first information about Android N, the next version of Android, was an interesting new concept called Android Instant Apps.

The motivation behind the new feature was to find a way to make applications easier and quicker to access on Android devices.

Google compares this to websites which you can access with just a tap or click on a link in your web browser of choice, and that it wants the same experience for apps on Android devices. 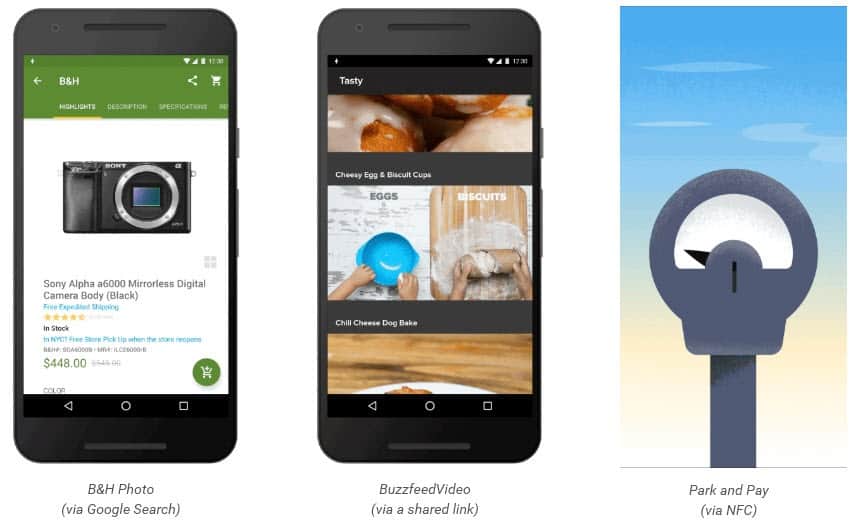 Say, you click on a link on Google Search that takes you to an online store that has an Android app supporting Android Instant Apps as well.

Instead of rendering the store page in the web browser, Android will either load the service's app if it is installed already, or download a lite version of it to the device that is used only for that occasion but not installed on the device.

Downloads are limited to a maximum of 4 Megabytes for apps in this case, and users get the same experience that the application provides without installing it. In fact, the downloaded application is removed from the system afterwards again.

That's not to say that you cannot install the app afterwards as the option may be provided by the developer of the application. Android Instant Apps does work with links but also NFC.

Google notes that it takes little development time to update existing applications to include Android Instant Apps functionality, but that the feature is limited currently to select partners.

Android users will get the feature later this year, and it won't be limited to Android N but compatible with all versions of Android starting with Jelly Bean 4.1.

Developers benefit from the feature as it exposes their application to more users, and users may benefit from it as it allows them to use part of an application without installing it which can be very useful for one-use type of applications.

It is unclear right now whether controls will be provided to turn the feature off completely, or for individual sites and services.

I can imagine that it could be very frustrating if a site you visit regularly pushes the Android Instant Application to your device each time you load it even if you don't want to use the application.

There are plenty of reasons why you may not want to use an application this way: bandwidth, permissions and functionality are probably the core ones.

Additionally, it may confuse users initially when an application opens automatically that they have not installed.

Android Instant Apps could push users deeper into the Android ecosystem by making them use apps instead of web pages.

The verdict is still out whether the feature will be more useful than annoying, or vice versa.

Now You: What's your take on Android Instant Apps?

Previous Post: « Android: know who tried to get in your phone
Next Post: Benchmark your phone with PCMark »