Microsoft enabled full support for asm.js for Windows Insider builds 10532 and up yesterday.  Since it is generally assumed that the long-awaited TH2 update for stable versions of Windows is 10586, it will be available on those systems this month as well since Microsoft plans to roll out the TH2 update to all systems this month.

Asm.js was designed by Mozilla and implemented in the Firefox web browser in Firefox 22 on June 25, 2013.

Without going into too many details, it is a subset of JavaScript that improves performance significantly for applications written in languages such as C/C++ that are ported to JavaScript using source to source compilers.

The main advantage of asm.js is that performance is much faster when compared to code that is not using asm.js.

Example applications that benefit from asm.js are the Unity game engine, the Unreal engine, or ScummVM.

Microsoft implemented asm.js back in June 2015 in the company's new web browser Microsoft Edge but hid it behind a flag at that time. Yesterday, the company announced that asm.js support is now available in the browser by default.

In addition, both hosted web applications and WebView, which is used by Windows 10's Universal Windows Applications, may benefit from optimized code s well. 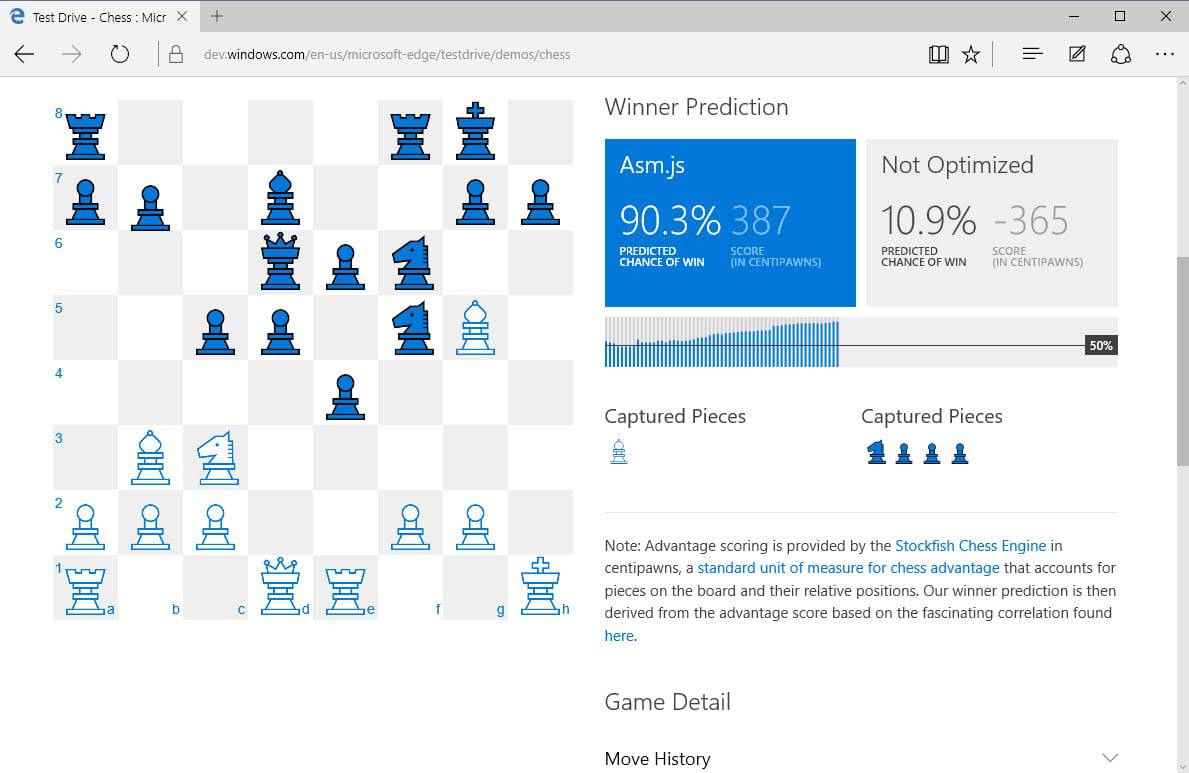 Microsoft created a Chess Battle demo to illustrate the point. It pits an asm.js optimized computer AI against one that is not optimized and limits turn length to 200ms.

Note: If you don't run an Insider Build currently, you need to enable asm.js in Microsoft Edge by loading about:flags in the web browser.

The optimized AI has a higher likelihood of winning the game because of asm.js as it can process more moves per turn than the AI that does not benefit from asm.js. Options are provided to change the time per turn, skill level of the AI and contempt value.

Windows Store applications benefit from asm.js as well through WebView. It is too early to tell if that will become a popular option going forward though.

It is likely however that it will get more prominence thanks to asm.js being supported by another major browsers now.

Additional information about the implementation, other demo apps benefiting from asm.js and debugging information for developers are provided on the official Microsoft Edge Dev Blog over at Windows.com.