7Gif is an animated Gif player for Windows

Animated gifs have made a comeback in recent time. Not on personal homepages but as short viral video clips that get posted in the hundreds each day on sites such as Reddit, 4Chan or Imgur.

While some are trying to kill animated gifs for good, by replacing them with HTML5 videos, it is likely that the format is not going anywhere in the near future.

All modern browsers play animated gifs just fine and so do the majority of media players. This leaves little room for a desktop program dedicated to playing these animations.

7Gif has been a longstanding animated gif player for Windows. It does require the Microsoft .Net Framework 3.5 which Microsoft has integrated into Windows 7 and newer versions of the operating system natively.

The app looks like many other media players on start. Use the load button or drag & drop to load an animated gif into the program to play it immediately. 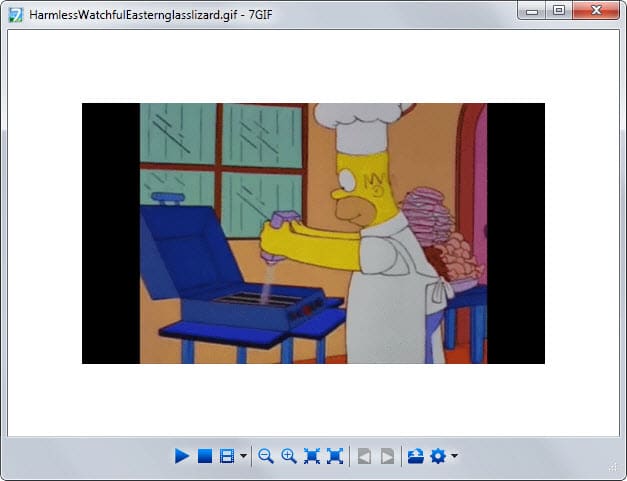 The core functionality is not really different from the majority of players out there. You can pause and stop playback for example.

What sets 7Gif apart from many other players is a number of extra features that it supports. You can zoom in or out for example, or force the animated gif to fit to the program window automatically.

7Gif supports options to navigate the gif frame by frame forward or backward. This can be useful to take a closer look at specific frames which you cannot really do without that functionality.

Another feature that 7Gif supports is to speed up or slow down the playback of the gif. Many of the playback options are accessible via keyboard shortcuts as well.

The cog icon hides several other options of interest. It enables you to save the current frame as an image or all frames, print the current frame, check file properties which reveal information about the resolution and size among other things, or load the advanced settings that you can use to configure the program's functionality in detail.

7Gif is a specialized application to play animated gifs on Windows systems. While it is not the only program to offer that functionality, its extra features may make it worth it especially if the default media player used on the system does not support some that you require. It is likely however that the majority of users don't need the program.

Now You: What do you use to play animated gifs?