Adobe has just launched a new program called PlayPanel. Some reports on Hacker News indicate that it is being advertised with Flash updates, but I cannot verify that claim after having updated Flash on two different PCs without that happening.

You can head over to the PlayPanel page on the Adobe website to download it. Before you do so, you may want to know more about requirements and the functionality that the program offers before you do so.

As far as functionality goes, it is a game management and recommendation program that displays a selection of games that you may be interested in or have already played in a supported browser in its interface.

Games are all Flash-based and hosted on various Internet sites. Whenever you click on a game link in Adobe PlayPanel, it displays information about it in the interface. This includes the genre, average rating based on Adobe PlayPanel user reviews, and a description of the game. That description does not necessarily have to be in English though so keep that in mind.

You can launch games from the application. They do load the Adobe website first before you are redirected to the site the game is actually hosted on. 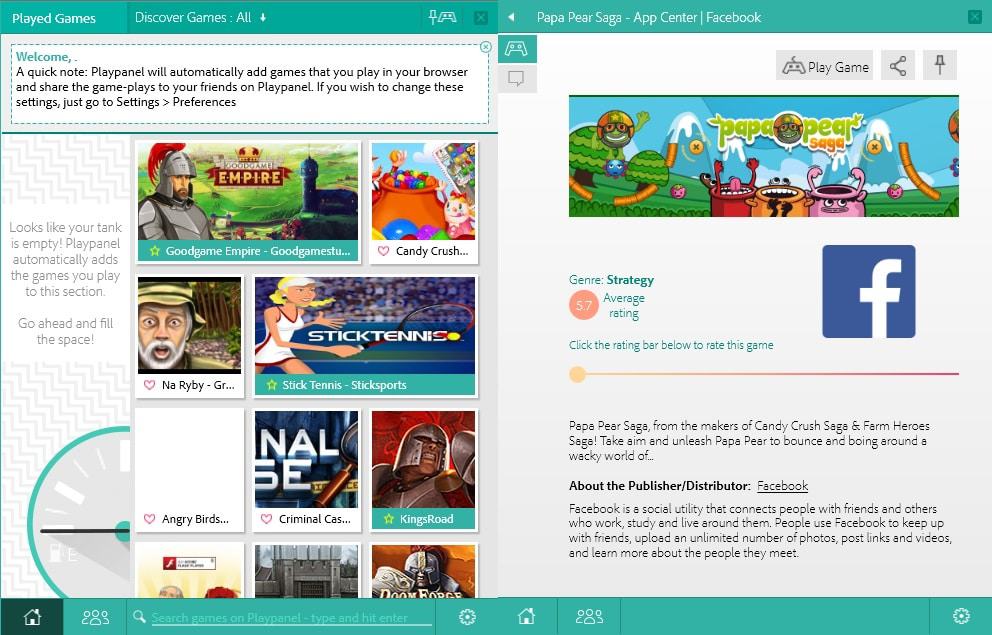 Games that you have already played are displayed in the left sidebar for fast access to them. There are also options to change the game listing from all to a certain category of games, e.g. puzzle, fun or adventure, and use the provided search to find games by name.

Games can be pinned as well or shared on Facebook if you want that. Adobe has integrated community features as well. Basically, it shares what you play with your friends which you can disable in the settings. To do so visit Settings > Preferences and disable the automatic sharing of your game plays with friends.

Here you can also disable the sharing of pinned games with friends, the adding of browser games to the application, and that it runs on system start.

The game selection is extensive, but you never know where it is hosted before you click. You are asked to sign up or in to accounts, for instance on Facebook, before you can play the game.

The barrier to run Adobe PlayPanel is quite high, considering that you not only have to download and install the application, you also need to link a Facebook account to it and have Adobe Flash installed.

The game selection and rating system is quite good, but not that special as you get similar features on sites such as Armorgames or Kongregate. The only difference to PlayPanel is that the latter links to various sites that host Flash games while the others don't.

Previous Post: « How to validate all Steam games in one go
Next Post: How to connect a Playstation controller to your Windows PC »