What you need to know about Steam Family Library Sharing

Steam Family Library Sharing is a new feature of the Steam platform that has just been made available to all users. The feature allows you to share your library with other family members or guests which sounds great at first.

Other users can install games that you have in your library on their computer and under their account, and play them as if they would own the games as well. They use their own game saves and get achievements for those games.

There are caveats though, which this guide will address among other things. Probably the first issue that you will run into is how to set up Steam Family Library Sharing.

Since you need to sign in to your Steam account on that computer, you either have to be there physically to do so, or use remote desktop to do so. While you could hand out your Steam username and password as well, it is not suggested to do so.

Start up the Steam client and sign in to your account. Click on View > Settings afterwards to open Steam's preferences. Here you need to switch to family where the following is displayed to you. 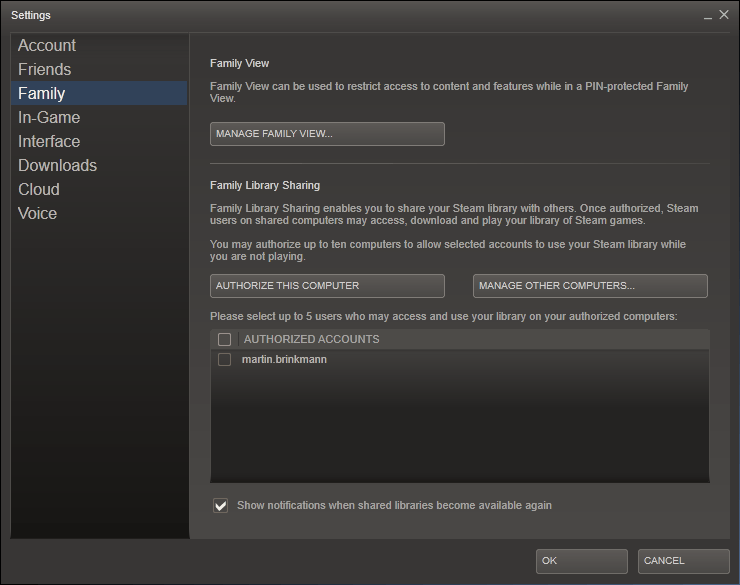 Click on the Authorize This Computer link (where it say deauthorize this computer in the screenshot). This enables Steam Family Sharing on the system.

Once you have authorized the computer, all local accounts found on the system should be listed by steam. You can authorize individual accounts here -- up to five in total on a maximum of ten different computers -- which can then access your Steam library as if it were their own. to do so, tick the box next to the accounts

Once you have done so, click on the ok button and sign out of Steam. When an authorized user signs in the next time, all shared games are displayed in the library under the user's name who authorized the sharing.

If you have used Steam Guard to sign in on the system, make sure you deauthorize the system again when you are on your main computer. 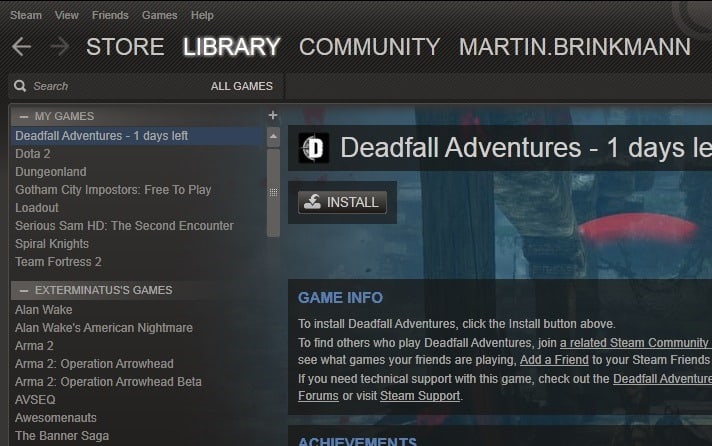 You do need to install shared games before you can play them, but that is the only requirement in this regard. There are however some drawbacks that you need to be aware of as well.

First of all, a library is only available to one Steam user at a time. If a shared user plays a game and the account owner starts to do the same, the shared user is given a grace period of a couple minutes to end that game (read save) before it cannot be played anymore until the owner of the game stops playing any game listed under the library.

That's however not the only issue you may come across. Not all games can be shared. Valve lists games that require additional verification keys, accounts or subscriptions as examples that you won't be able to play on a shared account.

Especially the last point is something that you need to consider. It is highly recommended to only share your library with Steam users that you trust, as you may get into troubles if a user misbehaves while playing games that you shared.

You can deauthorize accounts or computer systems at any time by following these steps:

Steam Family Library Sharing is a handy feature, especially for families and also for apartment-sharing communities.

While it can also be used to authorize remote computer systems, it is something that you do need to be very careful about.

Previous Post: « Steam's VAC protection now scans and transfers your DNS cache
Next Post: Save money by buying PS4 games in the USA »