Adblock Plus blocks some Facebook annoyances now (if you want)

Facebook has been the dominating social networking site on the Internet for the past years. Even Google with all its might did not manage to push its Google+ service past Facebook. While that does not mean that Facebook will still be number one in five years or so, it is fair to say that things won't change anytime soon in regards to being the top dog in the social networking world.

The majority of changes that Facebook makes on its website are controversial, due to the large amount of users and how they use the site. Whenever something changes, you can be sure that part of the user base does not like it and tries everything to stay away from those changes.

The popular -- but also controversial - ad blocking software Adblock Plus can now be configured to block some of the annoyances on Facebook so that you do not see those page elements anymore on the site. 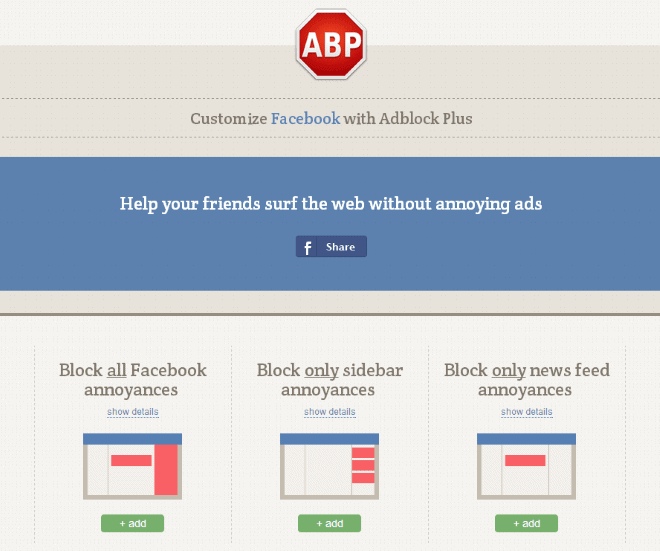 Here is the list of page elements that it can take care of for you:

Tip: You can use the block list in other extensions and programs as well. The list is accessible here. Depending on your extension, you may be able to import it right away -- should work for Adblock Plus forks for example -- or use the style information in programs of your own to remove those elements from Facebook. To add this to Adblock Edge for example, you would click on the extension icon, select Filter Preferences from the context menu, there add filter subscription, then add a different subscription, to add the Facebook annoyances filter list location and subscription title manually to the extension.

Anyway, if you have installed Adblock Plus, you can head over to the Facebook page on the website to add one of the three available filters to the extension.

Here you can either block all Facebook annoyances, only news feed annoyances, or only sidebar annoyances on the social networking site.

If you are a regular on Facebook and annoyed by at least one of the elements that Adblock Plus's new filter list can block for you, then you may want to give this a try either directly from with the ad blocker, or by using the information provided by the list in third party tools such as CSS Adblock or Remove It Permanently for Firefox.