How to configure Adblock Plus' Malware, Social Media Button and Tracking blocking

Adblock Plus is without doubt one of the most popular ad blocking tools on today's Internet. It is available for browsers such as Firefox, Internet Explorer and Google Chrome, as well as mobile devices and does a solid job at getting rid of many of the ads that you are exposed to normally on the Internet.

While I dislike the idea of blocking advertisement on all sites, considering that Ghacks depends on ads to stay on the Internet, I can fully understand that Internet users want to block annoying ads. I'd count popup ads and media ads to that category as they may break the flow of what you are doing.

The extension has been criticized recently for its "acceptable ads" guidelines which allow some ads to be displayed. I do not want to rehash all that has been said about that, only that you can disable that in the program options so that all advertisement is blocked again.

If you have installed Adblock Plus anew recently on a supported system, you may have noticed a new first run dialog that promotes other uses of the program.

I have tested this in both Firefox and Google Chrome, and both display the options on a first run page after installation. I'm not sure if existing Adblock Plus users see that page as well after they update their version.

You can enable additional features on the page. You may know that the program uses subscription lists for the blocking that you subscribe to, and technically, those three suggestions you find listed here are just that.

This list is powered by Malware Domains, a service that aims to block malware by blocking connections to domains that are known to distribute it.

It runs in addition to the browser's own protection, which may warn you about attack pages that you are about to visit.

The malware blocking in Adblock Plus does not display warnings on the other hand, it either blocks connections from happening outright, for instance if a clean page tries to load contents from a blocked site, or blocks the connection halfway-through when you visit a blocked domain.

Social Media buttons are everywhere, and yes, I'm also using them here on this site. They do have two main purposes for me: first, it gives site visitors options to share contents more easily. While experienced users won't have any problems sharing contents manually, many users do not share contents if no such buttons are displayed on the page.

Second, search engines may use those information as signals for a site's popularity, and a site without them may be doing worse than a site that is making use of them.

Anyway, if you do not use social media or never share contents, then you may want to block the buttons to avoid them from being displayed. It also gets rid of potential tracking issues and may increase the load time of websites.

The third and final option that you have is to disable tracking on the Internet. While it does not take care of all tracking, it blocks a large amount of ad companies from tracking your movement on the Internet. 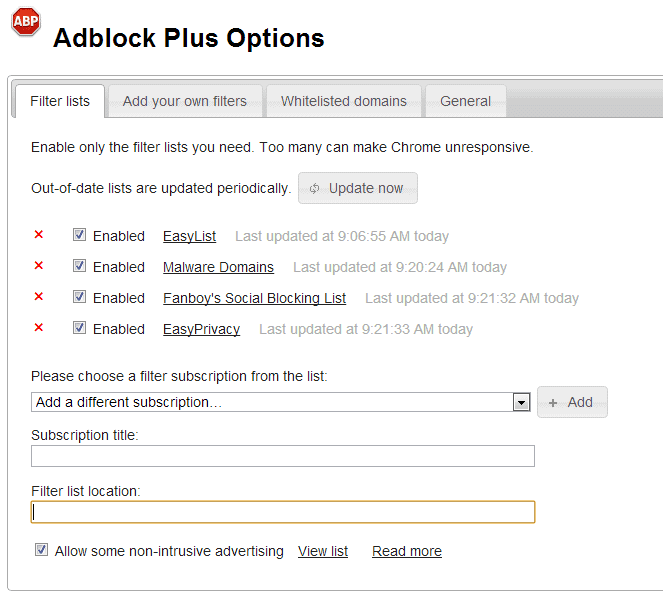 Here are the locations of the list. You can add those to your copy of Adblock Plus if you do not get the First Run dialog:

You need to add them as custom subscriptions in the filter preferences.

All three options have been available before, but you had to subscribe to those lists manually to make use of the functionality.

Martin Brinkmann is a journalist from Germany who founded Ghacks Technology News Back in 2005. He is passionate about all things tech and knows the Internet and computers like the back of his hand. You can follow Martin on Facebook or Twitter
View all posts by Martin Brinkmann →
Previous Post: « Mozilla proposes that browsers may share user interests with websites
Next Post: QuiteRSS 0.13.2: revisiting the RSS reader after a year »