The majority of Windows users are probably not using the Windows command line regularly, if at all. And there is no real need for that anymore on the system as the majority of standard operations can be run right from the graphical user interface instead.

If you have used the console before, you may have noticed that it looks like a relic from the past with its black & white interface and rather quirky handling.

ColorConsole is a portable alternative for Windows' cmd.exe tool that you can run right after you have unpacked it on your system. It is not replacing the default Windows command line tool, but merely providing you with an improved user interface for it that you can run instead of the original program. 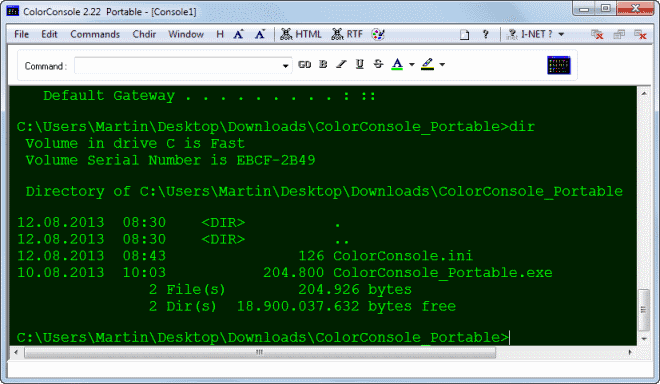 You will notice a couple of things right away when you start the program for the first time.

Those are just the three features that you will probably notice immediately after starting ColorConsole. There is more though that you can make use of.

You can run commands right from the start location and do not need to switch to system32 manually for that.  If you do not like the color scheme, you can easily change it with a click on the text and background color buttons in the main toolbar.

Here you can also add commands to the favorites by simply running them from that location. They become available in the pulldown menu afterwards so that you do not need to type them whenever you need to run them.

Commands can be added to the Commands menu of the menu bar as well so that they can be loaded from there right away when needed.

ColorConsole ships with a batch of other options that you may like. The menu bar displays additional tools and commands that you can make use of. Here you can increase or decrease the font size, export the last output to HTML or RTF, or switch to one of the themes the program ships with.

Another interesting option is the ability to run multiple versions of cmd.exe in different tabs in the same interface. Just select File > New or click on the new button to do just that. The tabs are completely independent of each other but use the same set of favorites and the same theme by default (you can change the latter so that they use different themes).

Last but not least, it is easier to copy, cut and paste information when you are using the ColorConsole interface as it works just like in any other text editor you come across.

ColorConsole 2 ships with a batch of improvements for Windows' native cmd.exe interface: from saving command favorites over resizing the window to your liking to different color schemes. All of those extra features make it easier to use, and since it is portable, it has no impact on the system whatsoever.

Martin Brinkmann is a journalist from Germany who founded Ghacks Technology News Back in 2005. He is passionate about all things tech and knows the Internet and computers like the back of his hand. You can follow Martin on Facebook or Twitter
View all posts by Martin Brinkmann →
Previous Post: « Convert, Compress or rename files automatically in Microsoft Windows
Next Post: Windows 8.1 to be released officially on October 17 »