Encryption is one of the most effective ways of protecting data against third party access. One popular option for home users and businesses alike is to encrypt part of or all of a partition of a PC. Programs like True Crypt or Bitlocker are commonly used for that purpose, and they do a solid job at keeping prying eyes away provided that they have been set up correctly.

While encryption may prevent direct access to unmounted data, it does not mean that attackers cannot identify that encryption is being used on a computer. The program TC Hunt for example can identify True Crypt volumes on a system.

Depending on who you are dealing with, it may lead to additional questions or the request to decrypt the encrypted container or partition. And even if you are still in control of that, forensic tools exist that may get access to the storage even if you do not hand the master key over. 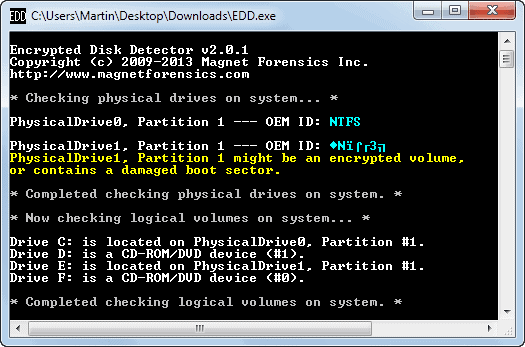 EDD is a free program for the Microsoft Windows operating system that you can run on the system to search for encrypted volumes. The application can detect TrueCrypt, PGP, Safeboot and Bitlocker encrypted volumes currently and the developers promise that support for additional encryption programs will be added in future releases.

Encrypted Disk Detector scans only for encrypted partitions, unlike TCHunt, which can scan for volumes and containers.

All you need to do is run the program on the system that you want to scan, accept the end user license agreement, and wait for the scan to complete. This should not take longer than a couple of seconds.

The software checks physical drives first before it switches to logical volumes on the system. Potentially encrypted volumes are highlighted by it directly, which means that you may need to scroll up to access the information.

According to information on the product page on the developer website, the software scans the master boot record for signatures and volume labels.

Note: The program cannot be downloaded directly from the developer website. You need to fill out a form on the website and will receive a download link in an email once you submit the form.

The program itself can detect but not interact with encrypted partitions in any way.

Encrypted Disk Detector is a free portable program for the Windows operating system that you can make use of to detect encrypted volumes on a system. It is an alternative to the excellent TCHunt that supports additional encryption programs. The two downsides are that it cannot search for encrypted file containers and that you need to fill out a form before you can download it from the developer website.

Martin Brinkmann is a journalist from Germany who founded Ghacks Technology News Back in 2005. He is passionate about all things tech and knows the Internet and computers like the back of his hand. You can follow Martin on Facebook or Twitter
View all posts by Martin Brinkmann →
Previous Post: « Classic Shell 4.0 Beta brings Windows 7 menu style, drops Vista support
Next Post: PrivaZer 2.0 improves basic user interface and clean-ups »