If your computer has seen better days in terms of performance, you may be interested in running programs on it that are as light as possible on the system resources they use when they are running on the system.

While you can run Apple's iTunes or Windows Media Player to play audio files on your system, you may prefer to use programs that have a lower overall memory footprint.

AIMP3 is definitely a great choice when it comes to audio players, but if you really want to go low-end performance-wise, you may be interested in Hokrain instead.

Hokrain is a free portable audio player for Windows supporting a wide range of features despite its low memory footprint and size. 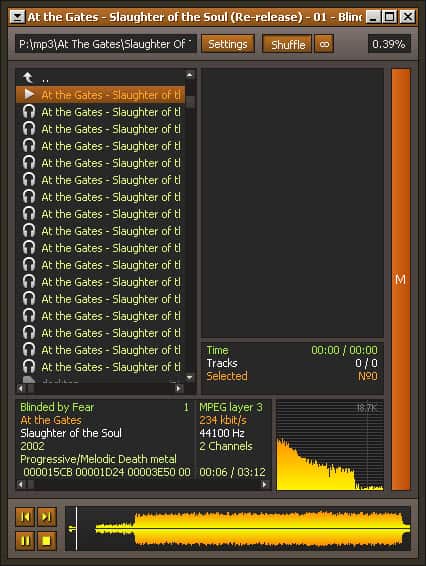 The music player supports a wide variety of music files, including mp3, flac, ogg, wav, mpa, wav and dozens of other formats. There is little room for improvement in terms of audio format support. When you start the program you are presented with a functional interface. The top area displays a file and folder browser that you can make use of to browse to folders containing audio files or playlists to play them right away.

Here you also find playback controls, information about the song that is currently playing, as well as a link to the program's settings. Here you can switch the player's theme, configure hotkeys for all core features it makes available, use plugins or configure the scrobbler if you are a last.fm user.

The author of the application has integrated several interesting features into the application that improve it significantly. The player remembers the listening order and displays tracks that have been played semi-transparent, and instant search that works in any folder or playlists.

While you can use the player on a local system, you can also add it to a music DVD, CD, or Flash drive that you carry around with you to play music on any computer system running the Windows operating system. The player uses roughly 6 Megabytes of RAM when it is playing music.

If you are looking for a low-resource player for Windows that is available as a portable application, then look no further than Hokrain. It's out-of-the-box feature set is sufficient to play nearly any music format you throw at the player. While it can't be compared feature-wise to AIMP3 or iTunes, it is certainly an alternative if you just want to play music.