If you like to use YouTube for watching the latest and greatest music videos, or classic music videos, you may have noticed the occasional "not available in your country" message when you try to do so. When a music video is not available, it is usually because of a rights issue but it sometimes can also be the case if the rights holder decides to release it to certain regions only.

The website GEMA versus YouTubes Top 1000 [Update: no longer available] keeps track of how many videos of the top 1000 music videos on YouTube are blocked in select countries of the world. The majority of countries linger around the 1% mark. Only eight videos are blocked in the UK, nine in the US and 10 in Spain.

When you look at the German number, you will notice that 615 of the 1000 top music videos on YouTube are currently blocked in the country, or 61.5%.

If you take all blocked music videos from all countries except Germany, you end up with 18.7 percent or 187 videos that are blocked in at least one of the countries. That's still less than a third than what's blocked in Germany.

A scraper was used to pull data from YouTube automatically. It requested all music videos with at least 40 million views from ten different countries and created the top 1000 list based on roughly 200,000 data requests it made.

The message that German users receive when they try to open a blocked video is shown below on the screenshot.

Unfortunately, this xx-music-content is not available in Germany because GEMA has not granted the respective music publishing rights. Sorry about that.

Gema recently filed an application for injunction against the message on YouTube citing that the message wrongly implies that GEMA is responsible for the blocking of the videos on YouTube. According to GEMA, it is YouTube's responsibility to pay for the right to play music on the video hosting site and if YouTube would do so, it would be allowed to offer those music videos on site just like any other site in Germany that pays GEMA for that.

The GEMA wants a share of the advertising revenue and money for every view of music videos on YouTube. Google on the other hand is using automated scripts to block music videos from being made available in Germany stating that it is not feasible for the company to check every uploaded music video on YouTube for GEMA rights.

To sum it up. GEMA wants YouTube to pay for every view of a musician or band it represents regardless of the type of video, e.g. commercial and non-commercial. YouTube can't pay that for a number of reasons and prefers to block music videos automatically on the platform to avoid being sued by GEMA in Germany for not paying for those music videos.

It is not only the users in Germany that are affected by this. While it is certainly frustrating if a music video won't play, there are usually third party uploads available that will play on YouTube. The rights-holders in Germany are also losing out as they do not make any money from advertising. 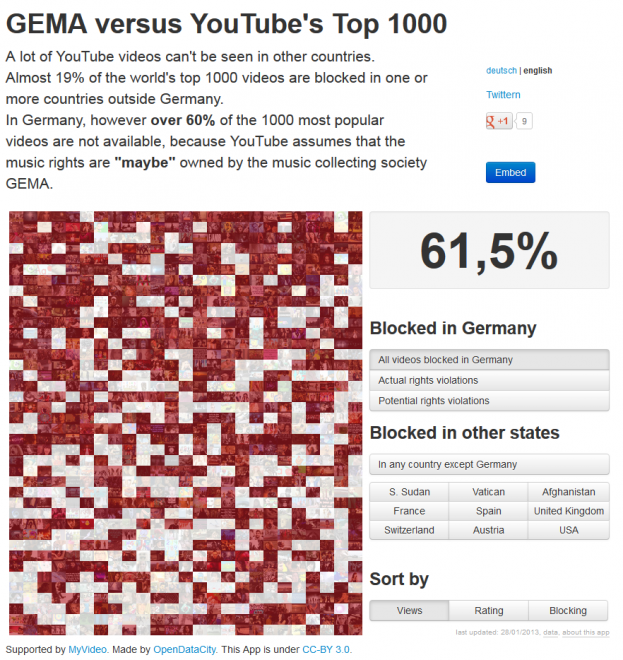 Previous Post: « Can I Stream It finds streaming movies and TV shows for you
Next Post: « Toastify adds global hotkeys to Spotify's Windows client